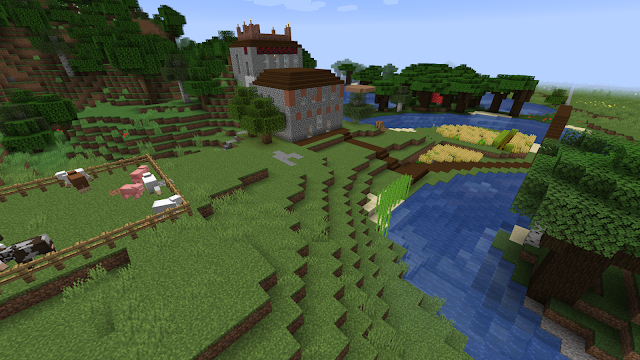 Blackburn Hall, built by Erik Eastham, shown with the second tower and Defense completed.  The bridge and road go North to the Aryl village, which lies just South of Cambrey

In Year 59, as Brian Eastham was building his home and career in Cambrey, Brian's brothers were all headed out on their own, as well.  David went and founded a farm at Ellsridge, just East of Cambrey.  Erik was handed a waystation request by Charles Robinson and his own father, Evan Eastham, in Cambrey.

Luna Bevanson had been mapping, trying to continue her father Omri's work.  She had went South of the Aryl village and ran across Pillagers headed North.  The Aryl villagers had built extra iron golems, seven in total! to guard their village. 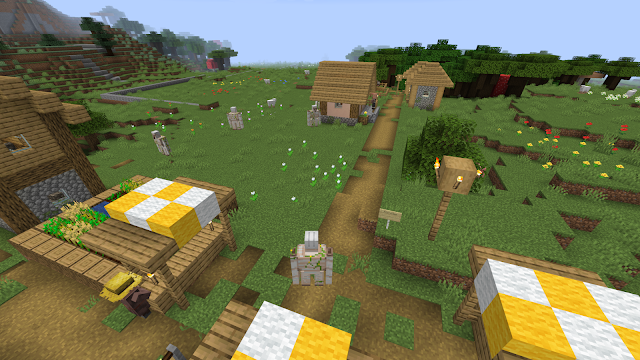 just a few of the Iron Golems built by the natives to protect their village, and the road south to Quarterpoint

The Cambrey Council consists of Charles Robinson, Evan Eastham and his wife, Pamela (Benson).  Also on the Council are Alvin Allen of Meadowview and his wife Sara (Parker)- as the entire Cambrey Plain is sometimes to be taken into account    As of Year 47, Omri Bevanson has joined the Council with his wife Adacia, who is an Aryl Native and helps keep the growing city in harmony with the nearby Village.  Originally Dirk Reynard was also on the Council.  Dirk moved to Cod Bay to marry Serena Pippington, and has since joined the Bank of Cod Bay instead. 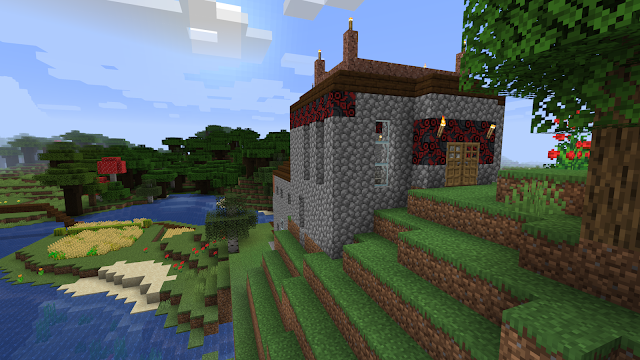 Charles Robinson was handed the waystation paper for Cambrey in Year 35, by the Barracks Council in Rivertown.  His own elder sons Gregory and Victor do not want to leave Cambrey, but since Luna (Omri and Adacia's daughter) has reported Pillager activity someone has to protect the Southern border.  Now Charles has singled out Erik Eastham, Evan's third son, to head South and take up a waystation along the Long River. The Long River flows East, all the way from Spate Station to the sea South of the East Pirate Shores.  Having at least one position along this river would make sure the river path stayed clear, and allow travellers to have a waypoint if they encountered trouble along their way.

Erik was given these four tasks:

1.) Build a self-sustaining waystation for travellers and for Defense against Pillagers.

2.) Ensure the river is clear and passable from Whitmoor to East Pirate Shores at least once per year, clear debris if needed.

3.) Build a bridge over the Long River South of Aryl village.

4.) Build a road from the new place, Quarterpoint Station, to the Aryl Village.

Charles: Did I perhaps put too much on him?  He's only seventeen?  I was twenty when they handed me my paper, and Erik is twice the size I was then.  Ivan well, he's not got the size but he's quick - he can scale a mountain in nothing flat.  I might wait a few more years and see what he decides he wants to do. 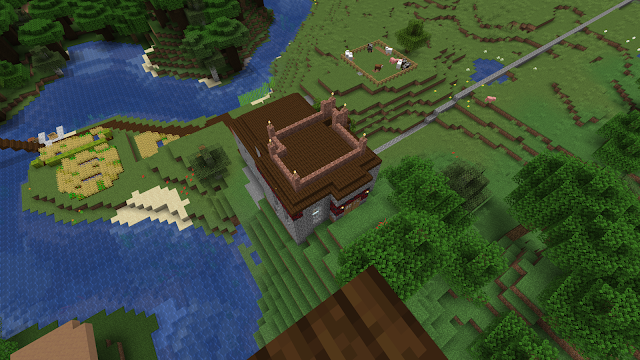 Once Erik got the construction started though, he was pretty sure keeping the river clear and navigable was going to be beyond him.  If he was out on the river, he wasn't taking care of the fields or watching for Pillagers.  The Long River is ... well... Long!  That was when he started enlisting help from his brother, Ivan.

Erik had only built a general hall for his own use when the first Pillagers attacked.  He had been to the Aryl Village just the week before while building his road and had asked his brother Ivan, trading with the villagers, to come visit him soon.  Ivan is the next to youngest of the five Cambrey Eastham brothers, with sister Gina and Olaf coming after him.  While Erik was holed up in his hall, watching Pillagers circle and point crossbows at him through the windows, he made terracotta, glass and mined deep down below his hall to pull up iron, gold and tons of stone. 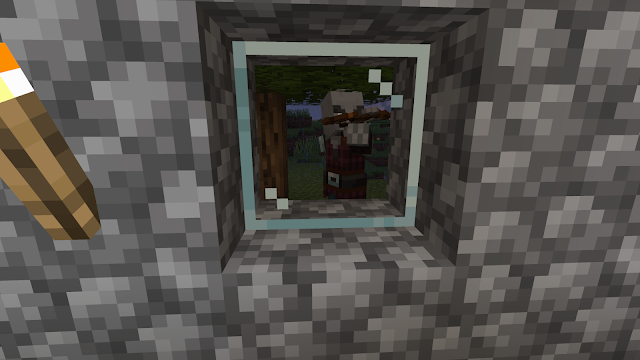 When Ivan arrived he saw the situation and did some quick thinking.  Ivan's gift is to look at the lay of the land and have a good idea what the best way up, around or through is.  It's not a huge gift, but it serves him well.  In this case - it served his brother well, too!  Ivan rushed back to the Aryl side and scouted out to see what the land looked like around his brother's new home.  He then picked a place on the side of the hill and dug a tunnel nearly straight into Erik's house.  Erik knew Pillagers didn't come through walls, but he was ready to hit whatever came through with an axe until he realized that loud singing and grunting racket sounded a lot like an Eastham.  Ivan broke through and found his brother leaning on an axe handle in the upper story of the Hall.  Ivan shared supplies and the two brothers made a plan. 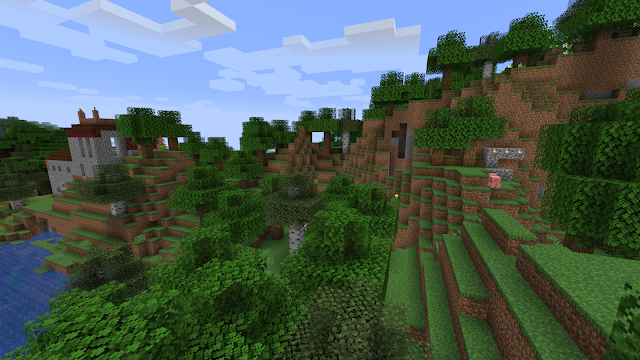 As soon as the Pillagers got distracted, Ivan went outside the new tunnel and lured them away, towards the lava field to the South.  Ivan then doubled and circled back around and into the Hall before the Pillagers could get their footing on the hills.  Erik was putting his newfound firsthand knowledge of the Pillager tactics to work for him.  He had learned a lot about Defense after being holed up for more than a week!

Erik got to work making a second tower specifically for defense, attached to the back of the Hall.  The second tower had many more large windows and a back door.  The small side doors in the lower station had been a good idea, as well, but had no visibility to see what might lie outside.  Erik used up his terracotta and all of the materials he had on hand.

The Pillagers came back for a second round ,and Erik really wished he could get up on the roof and see exactly what they were doing down below.  Ivan volunteered some granite from his tunnel work to make walls on top of the roof, so if the Pillagers did try to climb trees they would not be able to get all the way up.  Now both of the brothers would be able to shoot missile weapons from the roof and have a quick escape out of any direction of the Hall. 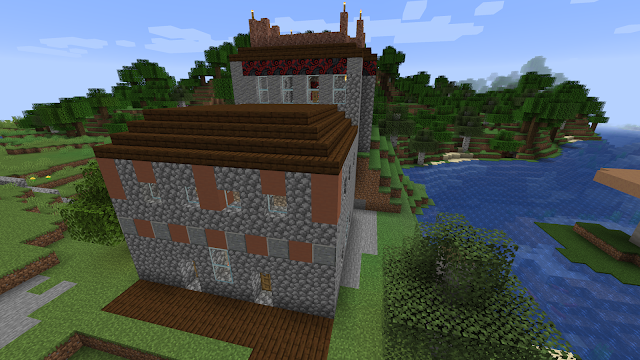 Blackburn Hall, made from native materials (lots of squid like to die on these shores just like at Rivertown, so Erik had 20 or so ink sacks just from catching them as he planted his wheat fields on the shores)

After Ivan saw the black terracotta that Erik had put into the walls of the second tower, he asked Erik 'Why don't you call it Blackburn?  You burned black terracotta for a week while you waited.'  Erik nodded.. Blackburn Hall, at Quarterpoint Station - on the Long River.  It sounded almost... dignified, definitely worth a spot on the map.  Ivan headed back off North to tell the Cambrey Council what had transpired, and said he would be sure to check in again in another week or so, as he had been asked to make the first river trek to Whitmoor to bring some letters to Joiner and Olaf, their youngest brother.  The Cambrey Council has staked out another place between Quarterpoint and Riggins Ranch on the Long River that could become Ivan's station in a few years, or his sister Gina's, if she shows interest. 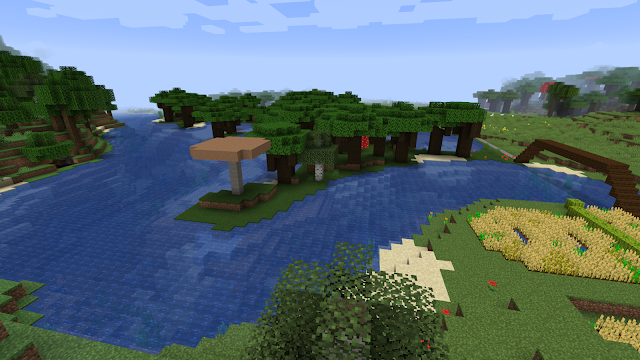 The Long River is well.. Long!  It goes all the way from the waters south of Spate Station and Whitmoor across the lower continent to the seas south of East Pirate Shores (which are East of Cod Bay).  It may be the longest continuous river, so far, in the Known World. 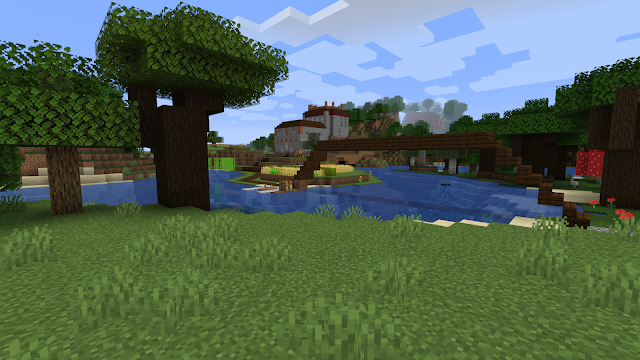 the four tasks are done, if Ivan will help Erik navigate the river, or if Erik gets some help and builds a community here at Quarterpoint

Erik has learned the lesson it isn't good to be out here all alone.  With the iron and gold he has found under the Hall he has enough to trade for almost anything he needs.  But what he really needs is a community.  He is thinking about the future, starting a family and maybe hiring a few men from the Aryl village to build houses and present arms with him at the Station.  It is a big responsibility - there is so much to do!  There is a lavafield South of the Station, as well, so a forgeworks and armory could easily be worked in.  The one thing that Erik isn't sure how to do well are walls - would wooden fences be enough to keep the Pilalgers at bay, or do they need cobblestone or granite?  Erik will continue to learn more about Defense - as the Pillagers definitely aren't going away 'for good' anytime soon.