Partner cities:  if you haven't read about Quarterpoint, do so first at this link!

In Year 69 Erik's shirt-tail cousin Garan Eastham from Whitmoor went off to build Palima Castle, even further West.  Garan faces a very similar task as Erik did, in a place smack dab in the middle between Vaya City and the unstable nation of Kriganzy.  For years emgrants from Kriganzy have been coming out to the North and the East from their villages, bringing their families, horsemanship skills and words of warning.  The villagers of Vaya have been more than concerned, as they are simply a day's ride away from the main city of Kriganzy, and all alone otherwise on the plains. 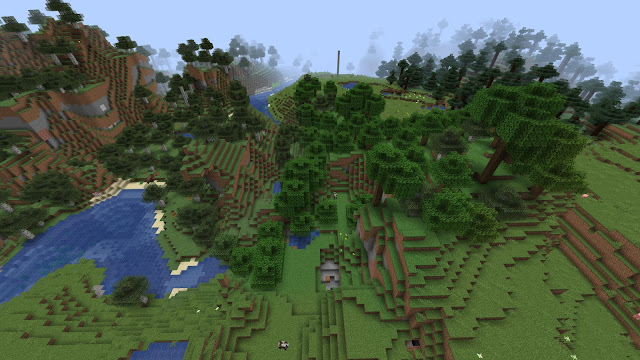 Talk Tactics:  This is the place of Defense between the mountainous hills and the wide open plain.  It is the stopping point in the river where anyone would need to ford over boats, and from a high enough vantage point one can see the entire plain to Vaya on one side and the plain before the Kriganzy Forest on the other.

Garan was assisted by Rega and Rygo Vandreas, half-Kriganzy themselves, in selecting and planning a point of Defense to be held against the country, being torn apart by internal conflicts.  Garan took a page out of Erik's book and gathered a group of Castlemen to live and begin their families at the Defense, provide supplies and protection that no one person can do alone.

Garan and the Vandreas twins have partnered with one of the Clans of Kriganzy, the Wellers and Arwens, marrying into them and inviting Dagan Weller and Marhel Arwen to come and live.  Dagan and Marhel are first cousins.  Garan married Dagan's elder sister Giselle, and Rega and Rygo have married (respectively) Dagan's younger sister Bevy and Marhel's younger sister, Joan.  This secures the alliance between Palima and the Fish Clan of Kriganzy, of which Dagan's father and Marhel's mother belong. 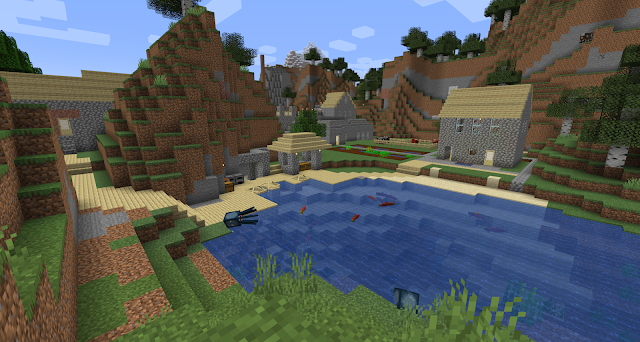 Carmide Aristo went South to Colsey Station, then further south to the village of Pazzi, and brought back his childhood sweetheart Marina.  Once he had returned with her to Whitmoor, he was asked to help guard Palima by his brother Arturo, and warrior sister Sofia.  He made the journey to help Garan know the lay of the land and how best to protect Vaya from attack. 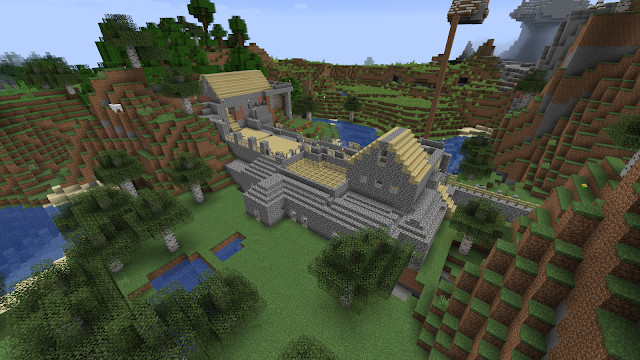 Palima Castle, after the fortification, but before Garan, Dagan, Marhel and the Vandreas' began to build the fields and houses.  Soon after this, Carmide arrived, and then Heath and Agbi. 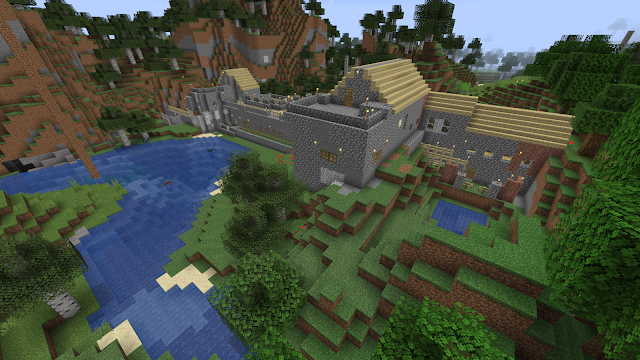 The Defense line is strong from this side of Palima.  Rega's house is in the granite extension to the right. 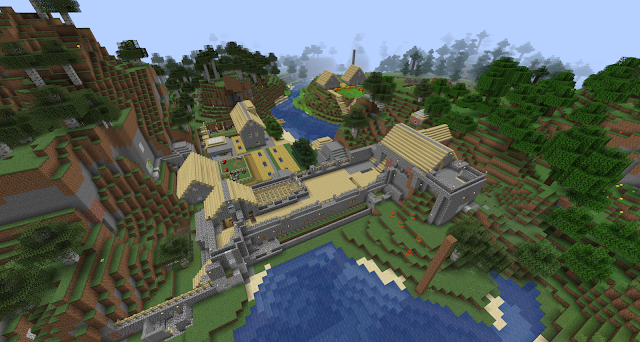 Further developments : 'A fort gathers a city like a rock by the river gathers moss...'

Heath Dee, from Vanter, arrived with his wife Amya.  He had spent a little time in Whitmoor, where he was then tasked with using his Excavation skills to clear the river path from the new castle all the way back to Vaya.  Soon after that Agbi Tesril, a native from the East Pirate Shores east of Cambrey, arrived with his wife Ulari (a weaver), to provide farming support on the plains now protected by the Walls of Palima.  Ulari can help turn the wool of the sheep into blankets, uniforms and banners for the castle.

Heath Dee and Agbi Tesril have built their houses in the plains to the Southeast, while the other Castlemen tucked their homes up in or around the castle walls.  Another citizen from Vaya, Heath's brother-in-law, Cosimo Veraccio, has built a house, as well.  He is planning to move his family here to help take care of the farms and animals after he helps Heath clear the river.

A castle like this needs not only a large supply of food, but people who can work those fields while the Castlemen keep watch from the walls.  Heath and Cosimo can fish and work on the river, while Agbi is glad to work the fields and bring in stores of food, but also keep a watch on the plains for attacking forces. They all will appreciate the protection the Castle provides for their families, if necessary. 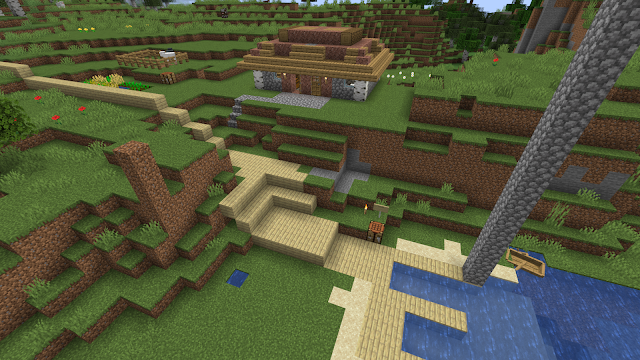 Marhel Arwen's house at Carmide Station, outside (above) and inside the tiny house (below).  If he marries and makes a family, he will likely need to expand it, but for now there are three single beds and he can host wayfarers or residents from the other cities to help with projects. 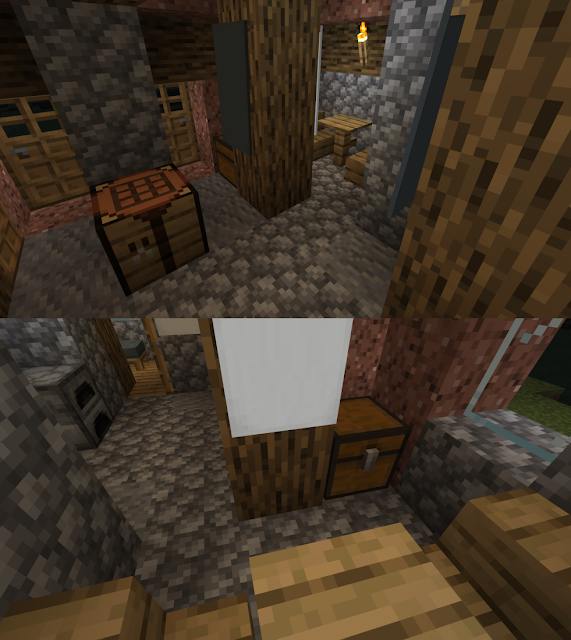 After Palima had been built, Marhel Arwen decided to head further East to Carmide Station and take up the waystation there, while Dagan Weller wooed Joiner Robinson's youngest sister, Helena while she was visiting Whitmoor from Cambrey.  Dagan is a dashing blacksmith and horseman - and everyone was very surprised when Helena gave up her place in the family mead business to build from scratch out in the Frontier.  Dagan built a house on the hill and moved out of the castle, but is still within a stone's throw of the docks, which eventually will have a steady trade between Vaya, Carmide Station and Palima. 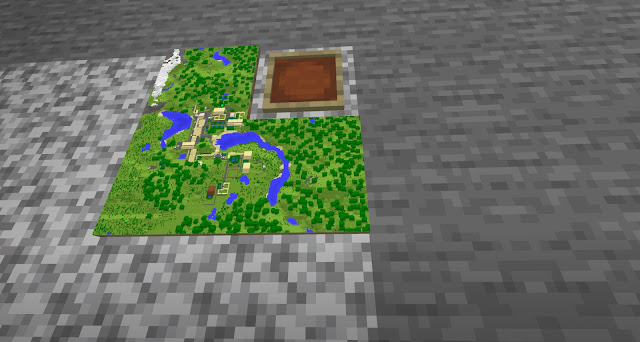 Garan has also started a separate cartography and mining office, to work on the map wall at Palima.  They will need to send out Scouts to the West to see what extent Kriganzy is expanding or fortifying, and also to look for and talk to refugees.  He has asked Rob Riggins, Hawk Riggins' son, just fourteen years old, to come down to the castle and be the first mapping Scout.  Hawk and his family came to Whitmoor when Rob and his sister Ava (now Joiner Robinson's wife) were young, to escape the internal conflict in Kriganzy.  Between Rob, the Vandreas twins and Dagan, there are enough Castlemen to sweep out beyond Palima and return with refugees while Carmide, Garan and Heath guard the walls with crossbows.

NEXT : Read more about the protective details and structures at Palima in this spotlight post