Wooden toys in the mail - thank you! 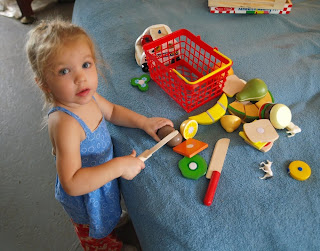 These wooden fruit and sandwich items were waiting at the post office today. We finally had a day off where I could go pick it up. Esme does really love it! Thank you Elizabeth :) There was also a set of wooden toy cars with little people that came when Grandpa Harvey was here. Esme has gotten great enjoyment out of all of it. She is serving us orange and kiwi with hamburger buns and pickles now at our desks. It's got me thinking about making a similar type fish to 'cut' like she saw Mama do with the catfish. 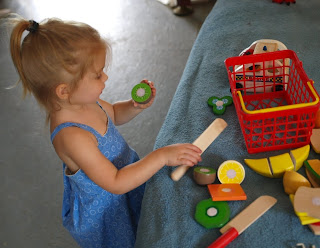 I have two kanji fabric sundresses, like the blue one in these pictures nearly ready to assemble. There is also a three-headed dragon pattern I've finally got the pieces designed for, need to cut one out and see how it stitches up. That was a challenge from Mark (5 headed... but gotta start small ha) I stayed up quite late last night and then got up in the middle of the night to post things...knowing there wouldn't be a lot of free time today unless Esme took a nap. Mark is downstairs making fried chicken pieces to freeze and I have to be back to work tomorrow at ten am.

Thank you again Elizabeth :) It really was too much, but I'll find a way to make it up. How about a six-to-seven-foot long fabric snake? made one before Esme loves hers and often makes it 'attack' Daddy while he is napping. The one she has isn't the one in the pictures - it is a bit longer and has an open mouth with two fangs and no rattlebox in the tail. It wouldn't take much at all to whip one up. Stuffing it is really the hard part :)
Posted by RheLynn at 10:20 AM

That snake IS awesome and Emily would LOVE it, but at this point I still owe YOU more for the awesome awesome package you already sent us. Let me get the Asian-grocery-store goodies in the mail, and then we will do another swap in a few months. I LOVE THE SWAPS!!