helping with dress and facing instructions 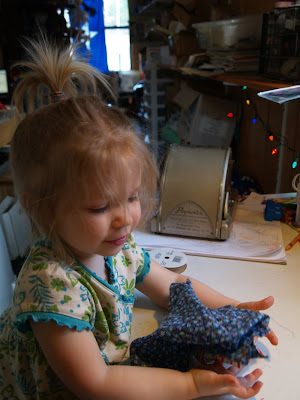 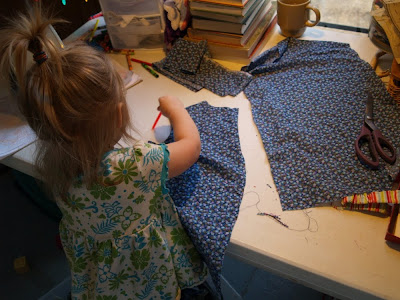 Here are a few pictures of Esme 'helping' make the dress earlier today. She pretended to draw around the pieces with a plastic stick, and hugged the pieces while telling them they were pretty. A sharp contrast to when I had it at Grandma's for a few minutes and she tried to put it in the garbage can along with the thread clippings! The trip to Grandma's house was unexpected - Esme demanded Daddy let her out on the porch, then wasn't certain if she wanted to go back inside or go to Grandma's by herself. I pulled on a jacket and put on shoes quickly (too quickly - as she ended up needing a diaper change once we were UP there) and we went for a visit.

Also there are two pictures here showing what I mean about clipping the facings with a pinking shear before turning them - and sewing a little away from the turned edge to keep it flat later in the wash.

Now we're home from Grandma's and I'm having a hugfest in my lap while I try to type this. We've already swept the floor and cleaned up our toys, had crackers and juice and fed my Facebook cows. The dress still has some left to do on it but it will probably get done tomorrow. I forsee a short supper, a bath and some laundry done tonight. Then I'll run her around until an early bedtime - as I have to be up and at work at six am. 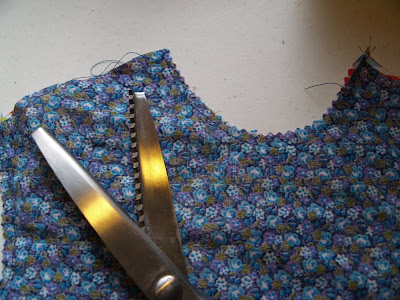 facings snipped to the curve with a pinking shear 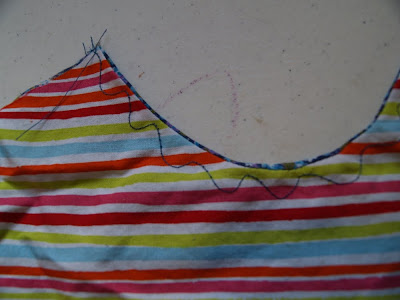