What's Wrong with That Sweater?

Well, so many of you asked what was wrong with the 'herringbone' sweater -- so I have to bear the true awfulness of what a new knitter can make without a pattern.. and still love enough to want to save it.

Remember, I started this project in November of 2004, only a few months after I started knitting! And I haven't touched it since -- except to wonder what to do with it. 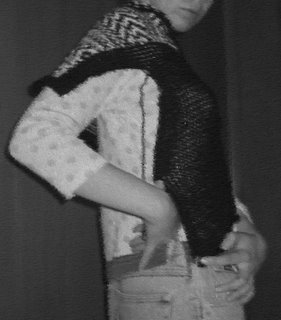 The Awful Truth of It
I GIMPed this pic because the pose was a little 'racy' - but it was the only way to show what is really wrong with this sweater! The gauge of the weave on the front is too big - almost meshy, and the 'back' isn't really a back - more of a sailor flap?? And it's wavy-edged, not sure if that will straighten out :o( 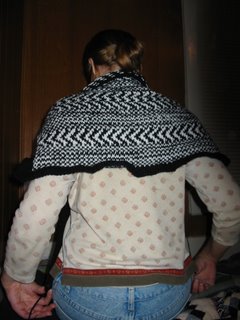 The back is way too short - and too wide... but maybe putting another back up underneath it, and making it like a sailor's uniform flap might save it. But should I even try? This yarn could be made into socks - or something else.. and maybe it would be happier? Do you still think I should save it? 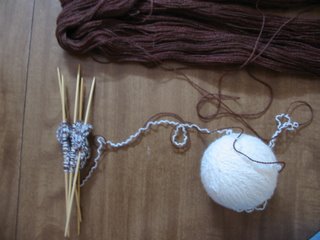 I started this today - because we are going on a long trip this week and I have to bring something with or go crazy. We are going to a convention to be part of the documentation crew. We will send back live podcasts, reports and other media to our company. Mr.J gets to run the sound equipment and I get to do the HTML and photography. 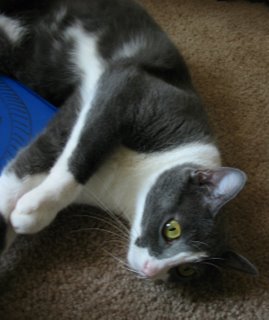 Sally: A long trip? I can't believe my ears!
What about us?

Linky: Knitty: Knit in Technicolor (article) Hehe, that's funny! When Mr.J and I were going out.. YEARS ago.. like over 8 years ago, he always said I was the 'girl with technicolor hair.' It wasn't dyed or anything.. but I had so many red highlights in dishwater blonde hair (light and dark mixed all over) that he could never decide what colour it really was... so it was technicolor. As I got further away from sixteen, it got darker and now my driver's license officially says 'brown.' :o( No offense intended to brunettes. But, brown? I really rather prefer the technicolor blonde ;o)
Posted by RheLynn at 7:58 PM

Hmm. First, you should go to my blog and follow the link to Knittymama's "I can't believe I knit that" contest and link to this post. :)

I'm not sure I'd rip it out - maybe bind it off and save it to remember those early knitting days so you can see how far you've come!

Wow, documentation crew - that sounds exciting! So, what will Sally and Willow be doing while you're gone?

Not sure about "frogging" the sweater.....but you might want to put it back in case there is a worldwide yarn shortage or something! LOL! Trip sounds exciting!! I could tell by the pic the Kitties are THRILLED about it! LOL!!! Looking forward to seeing the socks when you get back!

I still don't think it looks that bad. Then again I would probably spend hours trying to fix only to frong the whole thing or make a family member wear it! LOL

I think we all have a project like that sweater... :) Thanx for playing in my contest.

I dunno. Maybe you should frog it and start over, and only because you are much further along in your knitting now and could probably easily get the "do-over" right. I made my friend, Shell, rip out her first sock because it was wrong, though she says it was because she made me rip out so many things!