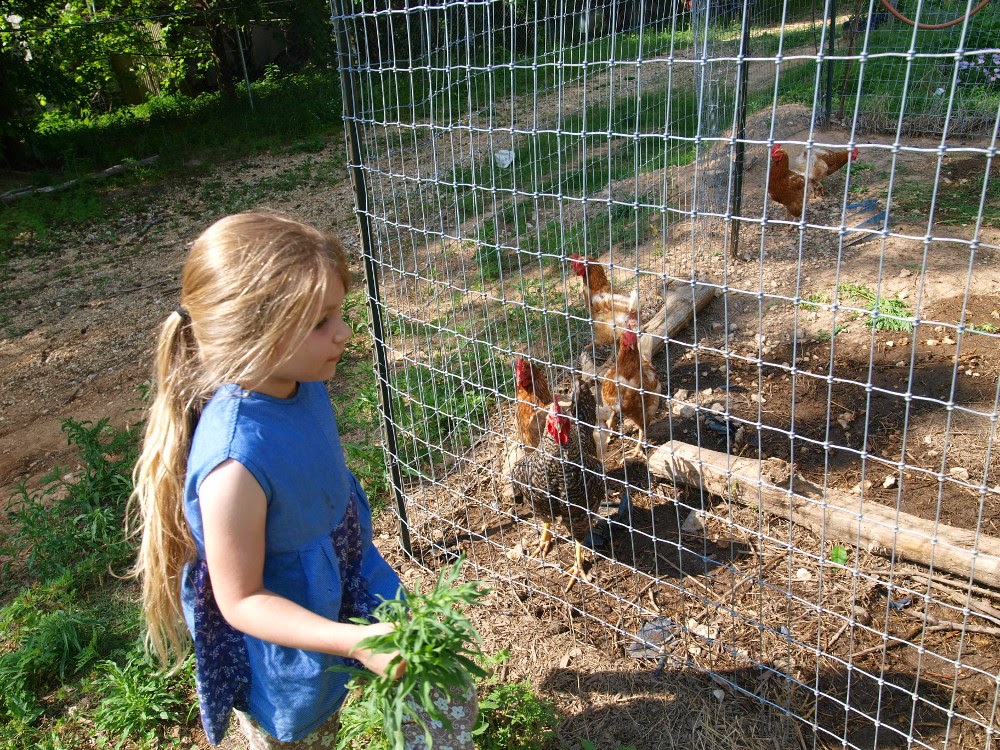 Feeding the chickens greens out in their coop - they really love clover, 'headknocker' which Grandma says is the name for a certain sort of garden weed we have in abundance, and honeysuckle flowers. 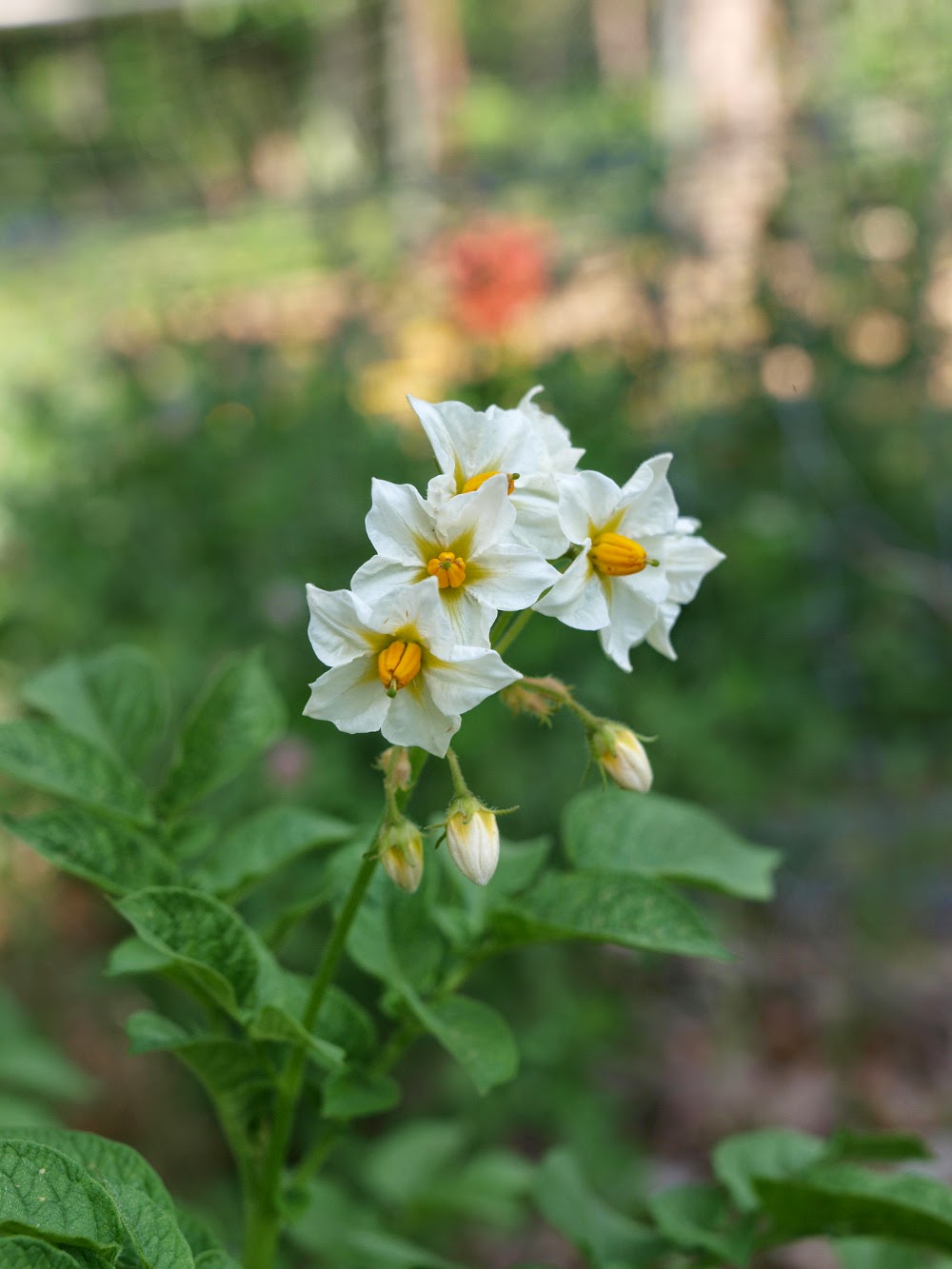 Our potato plants, seeded from some kitchen potatoes we had left too long in March - are doing very well.  I think the flowers are very pretty.  I had remembered Potato flowers being yellow, for some reason - bright yellow-green yellow, from my childhood.  I wonder if I was just mistaken or if this is just a different kind?  I really think I was just mistaken...as all the pictures I can find are purple or white, and that seems to ring some, too. 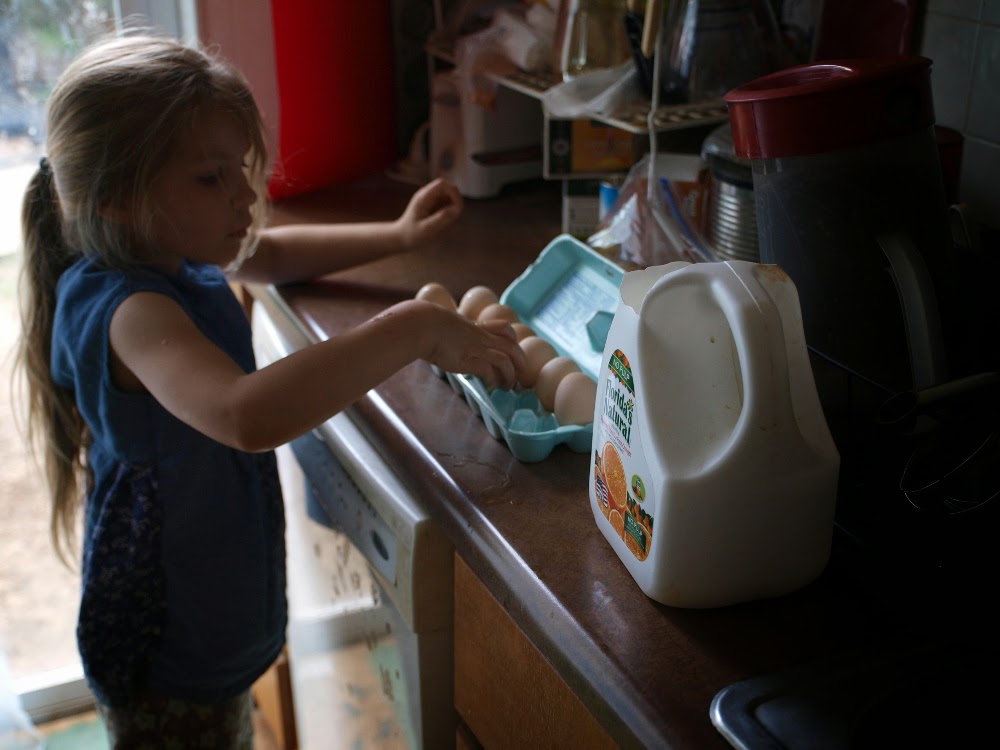 Washing and counting the eggs after she brings them in.  We had five, today.
She said one for each hen, but not one for each rooster.  There were four lying in the box and one in the coop, and she was able to tell the hen to give her that one in the coop and not have it break. 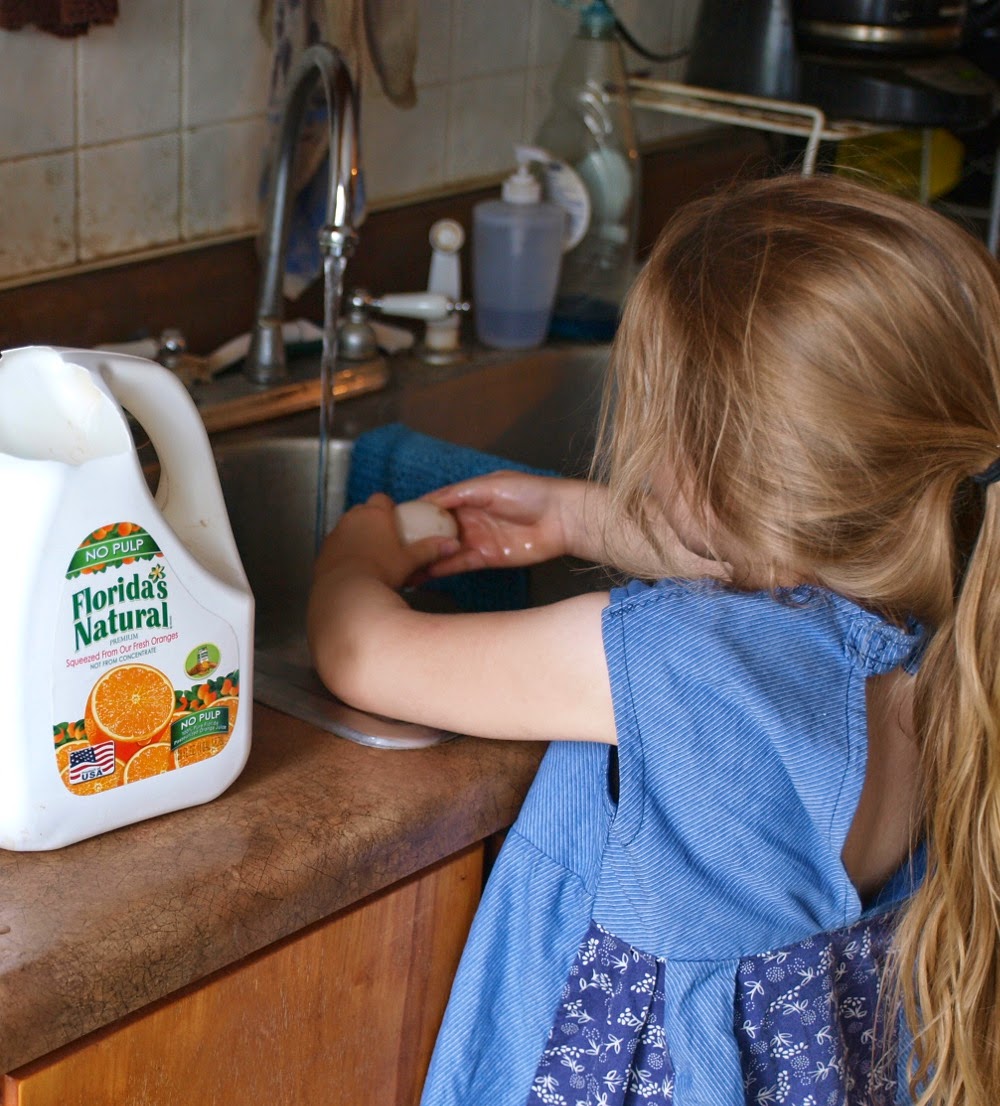 We received a large box of fabric from a lady at work the other day - it was being passed down in her church to find someone to use it.  I am planning making some things for Esme out of it but haven't gotten started on anything more than washing a few pieces and going through patterns.  She has grown quite a bit since the last time I did this!  She is now in between the size 6 and size 7 patterns - which is just where she 'should' be... I should make a few for summer and then start on a few for next year.  There is a gorgeous royal blue with darker blue flowers fabric that is in many pieces - but I can almost see a long sleeved dress still coming together out of it.  The lady at work said she saw the 'patchwork' possibilities in the box - and that is the main reason she thought of my sewing style and Esme's dresses.  :)  There was also a big bag of a pretty green metallic yarn, which I am kind of thinking of as a random birthday present.  I was thinking about green yarn :)  Even though my birthday isn't until next month, I am looking forward to that day to have off, sit in the sun, and think.  So much has happened this year.

I took a long nap today - had a bad stomach event last night after feeling bad since Friday morning... trying to find a way back to feeling okay but in the meantime it means I haven't gotten much done.  We did give away several kittens... that was yesterday.  Esme is a bit bummed that I haven't played more with her.. but she is bopping around the house entertaining herself mostly. Pink primrose is very pretty, too. Oenothera
I have a pot of lavendar started in the house that I want to plant near this, and there is a volunteer Cherokee Rose starting there, too.  Our perennial garden is going well.

We went fishing for a bit.  It was humans 5, fish 1.  One of them took off with my hook after it got dropped/knocked out of my hand and got the string caught up under the dock where I couldn't get to it anymore.