Sally is confused! (and some things about her) 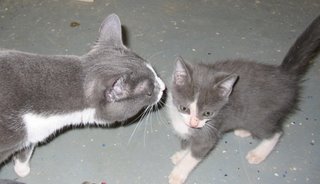 The girls are much more accepting, for some reason, of this little kitten than they were of the Grey manx! It is in dispute if this is their brother or sister atm.. we thought it was a girl, but it might be a boy.. The kittens will go to flea market next week --- we were too wrapped up in bashing code last night to get up early this morning.

I got my sample of gunpowder tea from Tea Chef. It smells very good! They reccommend some seafood recipes, among others.. which I'll have to try. The smell brings to mind oranges and either a robust cinnamon or a strong black raspberry with cream... I'll have to try my own recipe too.

If you really want to look at my math problem (not the pretty diagram, but a different one) I'll post a link to it in comments. It has to deal slightly with a part of Epicycloidal curves.

Some things about Sally:
in no particular order
I'll do Willow's list later ;o)
Posted by RheLynn at 1:30 PM

What a cute kitten!!! I can't look at your math. My head will explode.

Chris: I remember! I thought of that when 3 different adults couldn't comme to a consensus.. I guess we'll have to wait. If it's a boy, it might get kept. If a girl -- off to the flea market! :o(

I noticed with the face splotches!

Mmmmm... I just checked out your tea link, lots of good stuff! Do you usually make your own (no store bought tea bags)?

Mini-me! They are adorable. Here's hoping she's a boy. Wait. Uh, yeah. That's what I meant. I think, lol. They match so well! It's like fate. Fate to have another cat! Don't resist the force......

I'd love to look at your math - not that I'd understand it, I'm sure. I'm just like that.

Sheba shared loudness w/Sally and Chaos. I couldn't have smuggled her anywhere, that's for sure.

Oh, okay on the houndstooth kitty. It is cute, but I think I'll wait and get one of your adorable creations.

Rhiannon: A 4 cup coffee maker and a stainless steel tea ball will never fail you to make great tea.. no tea bags needed! Just make sure you get a tea ball with a good hasp, or you'll be straining.

Carrie K - the math problem is at this link if you dare... I might get a bit further on it this weekend.