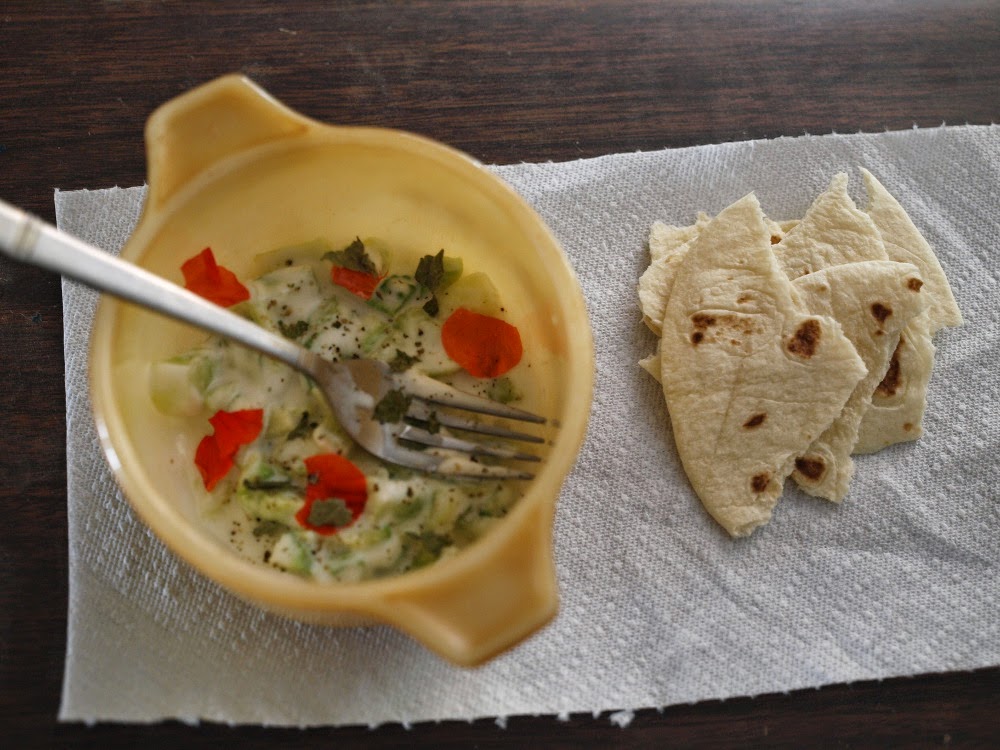 lunch today - cucumbers in mayonnaise sauce with nasturtium petals, mint, black pepper and a toasted flour tortilla.  The mint was the big win. I can't say I actually tasted the nasturtium petals at all, but it was the first one of the season, so ... maybe not enough of it.

Recipe: cucumbers in mayonnaise sauce.
It is so easy sometimes I don't remember I had to read it somewhere the first time - cut up the cucumbers as small as you want them... I go pretty small squares.  Then put them in a container with a lid - and sprinkle a little salt over them.  You could wait five minutes or so at this point, if you want to, especially if the cucumbers are kind of dry.    Put about a tablespoon or so of mayonnaise (Miracle whip is okay for this one -- it isn't for a lot of things I like, but it is for this) and put the lid on and shake it.    Some people put other things in this... vinegar, or etc... none of that in this.  I really did like the dried mint, though - it added a lot to this.

garden notes : Ireland creek Annie's are making beans now - they are between the cucumbers and are dry beans, so we will not pick them, even though they will look like they 'need' it... same with several other ones in the garden, like the Kenearly that is starting to vine up a small trellis, and the non Shackamaxon beans on the vertical fence.  I am waiting to see if the 'wax' beans turn waxy... they are not, yet.  The Providers continue to fill up the colander daily :)  I tried to convince some of the tomatoes and beans not to fight - we will have tomatoes soon, I think. 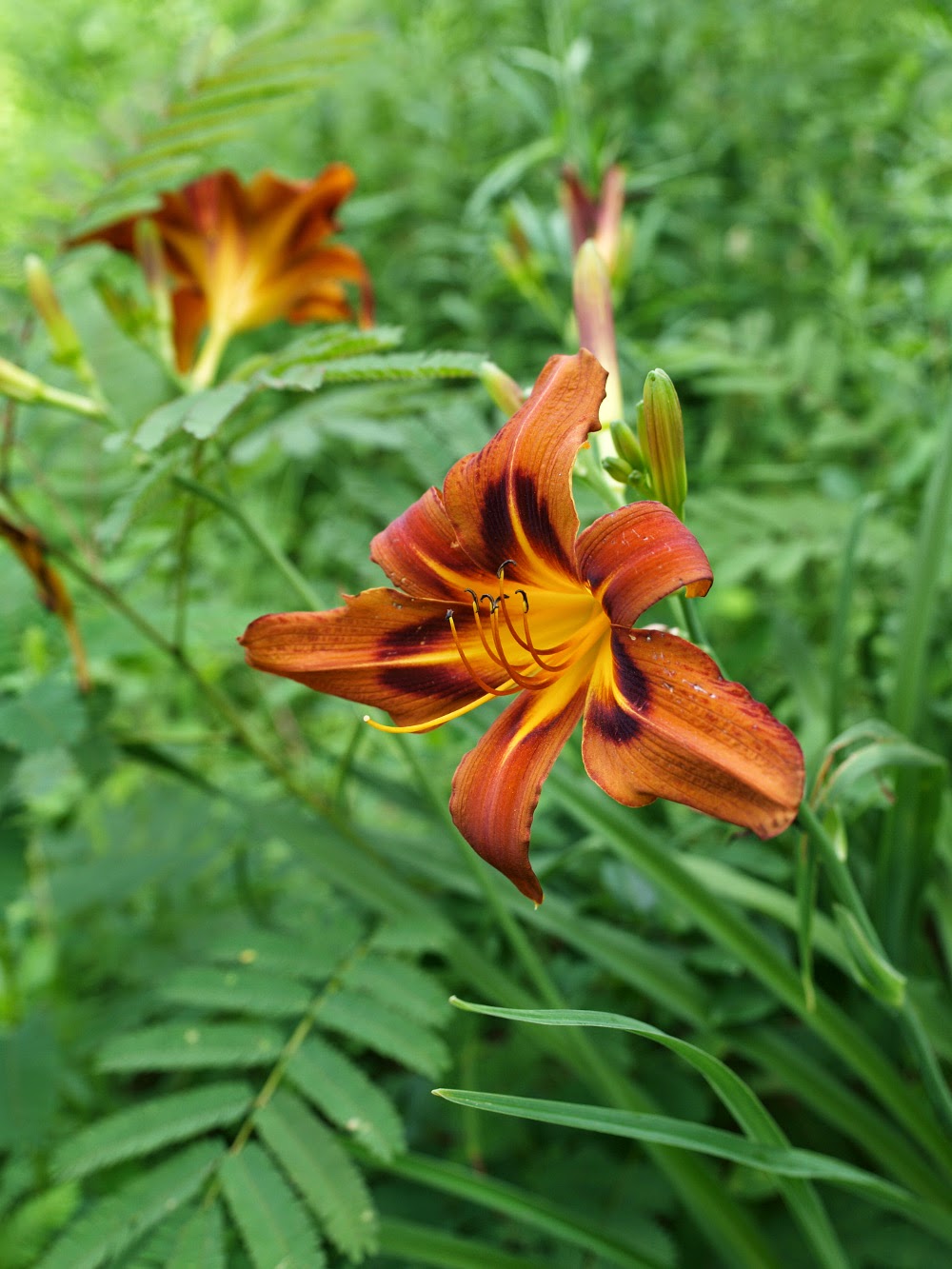 Our orange daylillies are blooming.  A dead armadillo incident happened to our yellow ones this year.. but the orange ones were saved specifically because they were surrounded by weeds and baby mimosa trees etc etc..

My father and stepmother left for home last night - hope they are doing well on the road back to Iowa.  We really enjoyed their visit and need to get pictures of them with Esme next time.. somehow we just kept talking and never did that this time.   They went out of their way to find me a lemon birthday cake and bring it to me on my birthday, which was extremely sweet (them, not the cake).   I admitted by geeky obsession with beans to them and sent them home with one of the more rare ones to plant in the colder climate... and a few other of our Tennessee treasures.  I'd like to order an extra batch of Japonica corn to send them that as an oddity - the striped leaves and purple silks...not sure if they would get any chance to plant that.

Esme and I went to town this morning before it go very very hot.. and took her to the park, and for a hash brown, and for to spend her allowance at the dollar store.  On the way there we talked about lots of things - and she really participated.  We talked about history, and what people did without stores to buy food at, and how they lived through the winter (lots of firewood) - and they need to be warm in the winter (with furnaces and they get wool from sheep and make it into things and clothes and boots to stay warm), and cool in the summer (she thought about shade and umbrellas), and how they do that.. and about droughts, and floods - how the corn needs water but not too much water, and the animals do, too...and many other topics.

She really not only has the information now, but can talk about it, relate things to each other and really understand how to find out what she doesn't know and why it is important.   I told her it was all like science, too - and when I said 'history' she said she knows that one - it was in school.  I related it to the past - when Grandpa's father was a child how things were, and that now was like the Jetsons for him - the future (and outer space)...  The one that really cracked me up was when we were talking about corn - which she saw in the field - and she knew it by the pointy things on top (tassels) and the strings (silks) that made the ears.  We talked about how the tassels and silks work together to make the seeds.. and she made a cross-reference to acorns and how they both grow the same.. she told me about the acorn seed being hard and needing water to break out a tiny vine that gets more water from the earth.  Then we talked about what leaves were for, besides being pretty.. and how the plant makes food from the sunlight on the leaves and the water down below and grows and stores that food in the seeds to grow many many more plants..   I told her that each single kernel on the corn and each single acorn on the tree can make a new plant, and that plant can have lots of new seeds (like a hundred, yes?) and on and on.  She said 'Wait Mom, I know this one - this is math, too.'  I really laughed at that one.

At the park I read her a little bit of Harry Potter (trying to get out of completely running around in the heat) while pushing her on the swing, and watching her climb the ladders etc etc... then we went for a short walk around the walking path, and climbed a tree and saw the water which was almost dry in the ditch etc etc.. she read signs and we talked about them.  'No Motorized Vehicles' she saw on a sign - and when I asked her what that meant, she said 'You can't drive air-o-planes down here.'... Well, that is technically true *heh*.  She was trying to encourage some children in their Sunday clothes to get dirty in the trees - 'There's syrup up here - you want to see?'  and then we went for a drink and a hash brown.  She is picking up her change amounts a bit better, now.. and was able to slowly make the right change to the cashier at the dollar store - and look at her receipt to see written down exactly what the cost was, what we paid, and what the change was.

We brought a piece of cake and some pork, and one of the orange daylillies, to Grandma Irene, with Esme staying there for a few hours.   I need to go collect her in a few minutes, bring some garden produce to Irene, do chickens, pick beans, start laundry,  feed supper, give her a bath for her speech appointment tomorrow.. and go to bed as I have 6 am work.

It was a very nice birthday, and having today to semi-rest (with a little Minecraft) was a nice way to wind it down.  I have enough canned beans from Mark to last another six months until Christmas again *heh*.. and a few cans of pumpkin, as well.