bits of here and there with rain and frogs 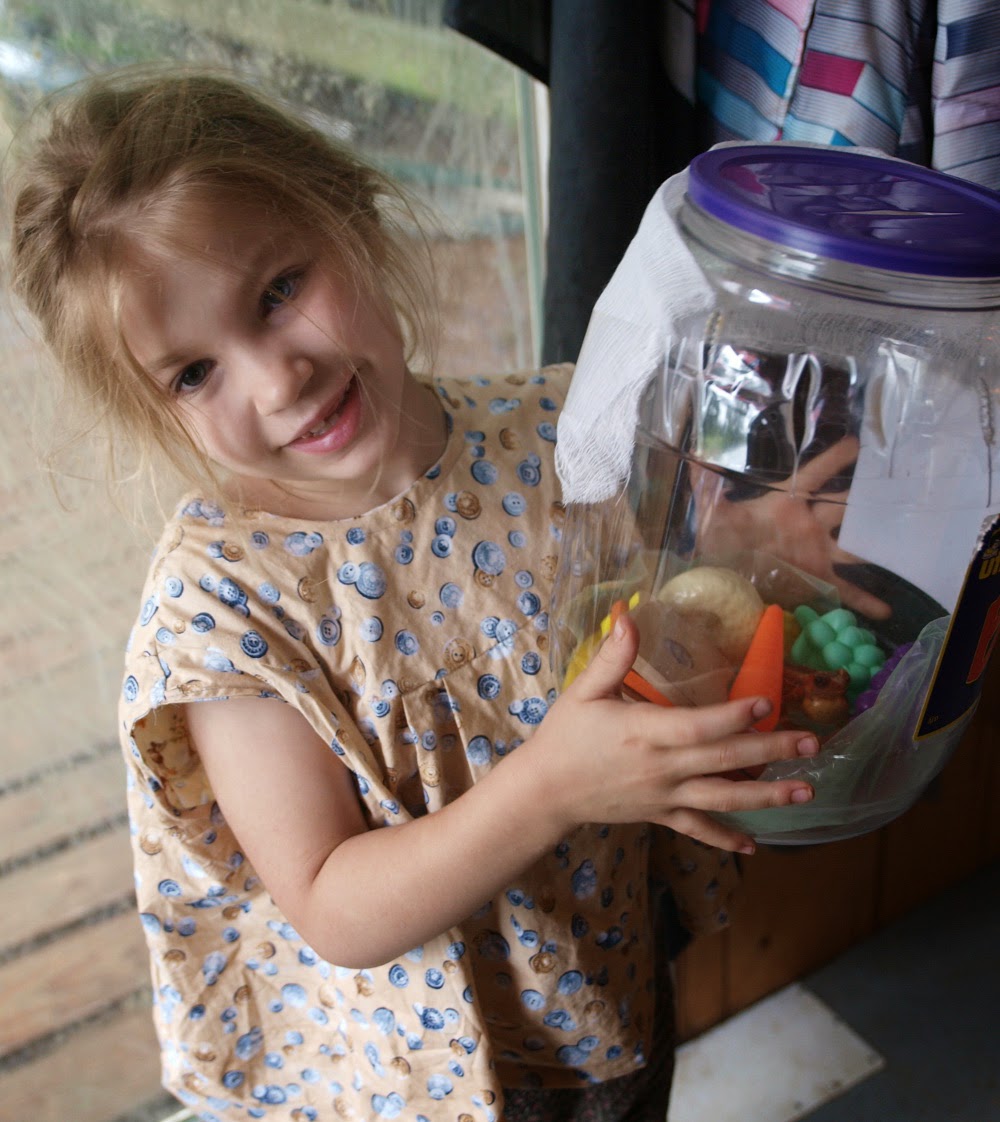 Esme with her pretend frog home jar.  This is a babydoll type night shirt I had finished for her.  It was made from the smock pattern I was trying out.  She had a real frog and grass in the jar yesterday - and we had her let it go just after sundown.  There was rain and flooding all through the area - but I made it home with only a little go-around and one area where the road was nearly washed out.  The sky was very very strange at 5:30 am this morning, with a greenish sunrise light coming through the thick fog.  So, I got up and started poking around doing things.  We might go to the co op today if the flooding has receded -- and there is a load of laundry to fold and things that can be organized to good use...

The smock pattern was not quite what I wanted - but I hadn't tried it yet.  It had a lot of circular yoke gathering... which makes it hang very loose by design... maybe a bit too loose for me.  I could alter it a bit and give it another go around or just go back to my go-to shirt for her and make several of those for going to town this summer etc.    She wants me to make a Mike green alien toy for her, but at one point last night requested a rag doll, too.  I've got some stuffing and one or the other of the projects could be done easily

I am trying out some cooking things today - a squash filled with pepperoni and cheese, a stab at using the old cornmeal mix, and maybe some French madeleine cookies later on if we don't get busy doing other things.  We have lots of eggs from the chickens to try using up, and dogs more than willing to eat mistakes.

I was reading a bit on a minimalist blog of getting rid of things -- but even though our house seems cluttered at times, I am still much more focused on creating things out of the things we have than simply making garbage or 'giveaway' boxes that never get given away.  There are some areas I can clear out paper clutter and such...  I would like to use the minimalist tendencies on the budget where I can, and learn some better cooking with things we have on hand... we have been making very good use of food on hand lately instead of buying lots of snacks etc.

Note.//  I had planned to plant my Mayflower beans in the corn but when I got out there the star sport from the Shackamaxon was all that I planted in four little places - it was dark black beans with a darker stripe over it and occasional yellow flecks - like a cross.. but I'm just not sure what happened there and want to see what comes of it.  They were planted by Rattlesnake beans and Hopi String beans last year - both of which have the stripe thing.

Made the French madeleines - although I used a muffin pan and papers in it.  The beating of the eggs and sugar together for five minutes or more was VERY long... and I think I should have let the butter cool a bit more.  We only have one muffin pan.  Next time I will try to make two runs worth instead of pouring the extra batter into a pie plate.   And I should have cooked them longer the first time - put them back in to see if they would form a crust and they did.  This will be a recipe I will try again to see if I can make it a bit better.. and it used up eggs pretty well.  Our eggs were so yolky that maybe putting in 3 eggs and 2 egg whites would be a better mix than 4 whole eggs.

Recipe :
4 eggs, mixed with 2/3 cup of sugar - beat together for 5 to 10 minutes
add vanilla before the flour
add 1 cup of flour in thirds while beating
add 1/2 cup (full stick) of butter melted and cooled (before you start step 1) in thirds
pour into muffin cups or a madeleine pan 2 tbsp at a time.
bake in our oven at 375 degrees for 20-30 minutes instead of the ten in the recipe.

will be an eggy spongey cupcake like thing with a crust on top and bottom from the pan.

I'm thinking we can tackle custard next week - studying up on it!

We lost another chicken today - think it flew over the fence after standing on the garden hose like we had seen it do once last week... not sure, as we were gone to town when it happened.  That puts us down to four hens and a rooster...
Posted by RheLynn at 6:34 AM