Esme 'on the phone'

I didn't get a picture of this, but it was very very cute. Esme was sitting with a block to her ear and babbling at it, then would put it up in front of her eye/nose and wait a second, then babble into it some more. I realized she was 'talking on the phone.' This is maybe the first time I've seen her pretending something was something else as a game, and not as a symbol to tell me what she wanted.

Mark saw it too and it was unmistakable. I asked her if she was talking to Grandma and to tell Grandma to send pizza. She held the 'phone' away for a second and then looked at me, looked at the 'phone' and then babbled happily into it again. I was on the phone with my mom the other night - and Esme was sitting nearby playing with a toy.

Sometimes she grabs our phones and runs off with them. She gets in trouble when she throws them or loses them. She decided the block was a safer 'phone' to play with!

Other Creative play: Found a washcloth on the floor and was pretending to clean windows with it.

Pacifier Update: Still signing for it, not getting it -- but has been entertaining herself a lot all morning. Lots of 'RAR' heard while she looks through her 'Dinosaur ROAR' book. 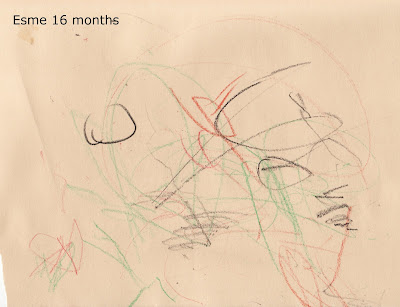 A drawing that is nearly 100% Esme. I drug a red crayon on it a little bit to indicate to draw on the paper - and she went to town with three different colors.
Posted by RheLynn at 8:42 AM