Living the Minutes and Not the Hours 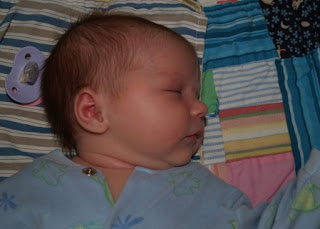 I told Mark a few days ago I can't believe Esme will be two weeks old soon. I said: 'Ever since those first contractions started, I feel like I've been living the minutes and not the hours.' He agreed we both are. The actual time we record in our minds has slown down immensely, yet the days somehow keep passing by almost unnoticed.

And it's not just this beautiful baby that is making us pay attention to every little thing while the hours somehow slip away in the process... although she is the majority of it ;) We have a task list a mile long, and only so much time to do it in.

We're transferring our store over to a new computer system, which means a lot of juggling in the next week or so. I have to learn the new system before Mark travels. I'm still not too good with the car, but I did drive the truck (also a stick shift) to the store yesterday with little problem.

We're working at being independent at a time (new baby) when most people we've known were leaning on others around them for much more than ever. But, we know we have to do this, because we want something that is ours, totally, that we know we can continue doing together on our own ambitions, with less chance that it could be pulled out from under us unexpectedly.

So far, we're doing quite well, but we're feeling the crunch coming up. We're stepping up our already busy days to get ready for the move. I'm almost ready to do that, but not quite yet. I'm sleeping better at night and Esme is on a much more regular, almost predictable schedule.

Milestone: Esme's umbilical cord stump fell off last night. She was having a 'digestion fit' at the time, when her belly hurts her and she has to fuss until something settles. I told her: 'Hey little one, be good to your new belly button, you only get one!'
Posted by RheLynn at 8:33 AM

Aren't they adorable when they are sleeping?

You will learn quickly that predictable schedules last very short periods of time. Enjoy it while it lasts.
Don't over do it.
I know you two want to jump the gun on something that could end up to rough, but you are recovering and 6 weeks is the time you can tell yourself you are truly recovered from the delivery.
Please think of your health at the beginning of every task.
Make sure you have eaten and had enough to drink before you try any tasks each day, and eat and drink again at the end of the tasks to keep your milk and stamina up.

When I had Boogie, I felt like time stopped. Big B was home with us for a whole month after she was born and we spent our days in a tired but happy daze.

Congratulations!!!! Esme is SO beautiful and looks so peaceful and content. She is so lucky to have such wonderful parents, and I loved reading about her birth and your connection to her when she first laid on your chest. How wonderful for you! I am so glad she arrived safely, and I will be checking back often to hear about her progress. :)

Wow! Look how much I miss when I get sick and get behind on Bloglines!!!

Esme is beautiful, congratulations!!! I'm so happy for you guys and glad to see you are all doing so well.