Failed Zoetrope and other recent things... 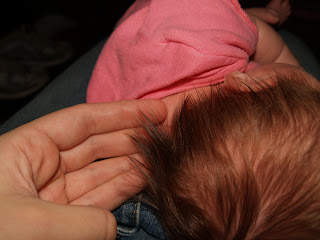 Esme's hair is getting quite long!
The color (right now) is darker than mine, but lighter than Mark's
Our new postal scale arrived in the mail, and the first thing we weighed on it was Esme. She now weighs 8 lbs, 15 oz, which is quite a bit more than last week!

We brought her up to see Mark's parents on Sunday and she slept almost the entire way through the visit. Mark's mom showed me some of his baby pictures. We were surprised how much Esme looks like her daddy did when he was that age ;) (which is quite a bit different than he looks now *grin*) 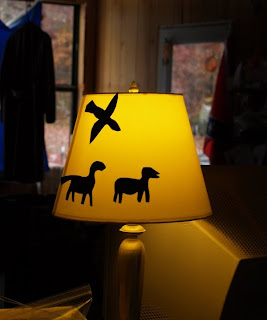 freehand paper cutouts taped onto the lampshade draw baby's eyes with high contrast
Esme likes to stare at the lights in the house, and at reflections of light on mirrors, chrome etc... 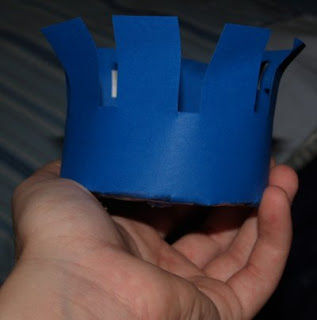 I cut out a circle, added a strip around the edge to make a cylinder, and cut strips in it at equal intervals. However, when I tried to place images in the places between the cutouts, it didn't really work like I thought it would :( Something larger, and much more exact measurements will be needed... or ricepaper that the light can shine through from the inside (like the lampshade above).

Mark is going to the DMV and getting the vehicle ready for his trip out to Utah and other places West. He thinks he might leave next week if he can get everything ready. I have to go to the DMV as well *yuck* next week, as I still haven't gotten there to change my name on my driver's license. Time is really passing by quickly here!

Hmmmm, I got a little PizzaQ, and it's your chance to prove you're smarter than Rene Descartes!

(Also it's a notice of what looks like an interesting lecture.)

But are you smarter than Descartes? Sure you are!

Next week? Are you going to be all by yourself w/Esme? Getting more comfortable with the stickshift? It's so much fun. It's "really" driving a car.

Her hair is such a nice color! Wonder if it will last.

Oh, her hair is wonderful!

I love the baby hair!

I hope your holiday weekend is a good one.

For the Zeotrope:
Um do you think that bakers parchment might work? Don't know if it is cheaper than rice paper.