Willow and Sally meet the helicopter

Mr.J borrowed a radio-control helicopter toy from our boss, and the girls don't know what to make of it. Willow thinks it is annoying, until it comes near to her, then it is going to eat her. Sally thinks it is interesting, and keeps pulling it down out of the air when it flies too low. Then - when it 'attacks' her, she attacks back. I'm worried it will buzz them badly, but so far it's been the other way around. Mr.J had to replace the rings after Sally batted it too hard and sent it crashing into the ground. 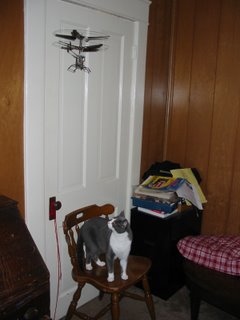 Sally: I hear something overhead! 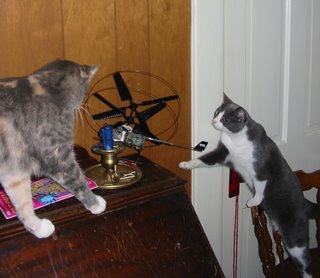 Crash-land on a candle left over from the last blackout.
Little claws have been murder on
my grandfather's secretary-desk lately.. :( 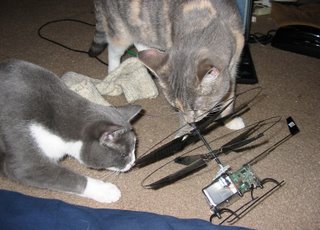 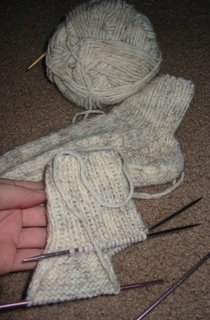 Bonus: That's a pair of white WoolEase socks
I'm finishing up knitting from a while back.

OH you know what! I think Carl has one of those! We should take it to Al's so Candy can play with it.

Thank you for the comments you left on my blog. What a fun play toy for the kitties. The socks are looking good!

Aw Willow and Sally look like they are having fun.

In the last pics the kitten looks almost like technical engineers LoL!

And then your the very last pics of your socks: its funny because I saw a lot of knitting while at the Norwegian Museum of Cultural History today:-)

I'd have one cat who would just stare at it, but not move from her perch, and another that would try to knock it out of the air. It looks like they had a fun time with it!

They are so cute! And yes, I have claw marks everywhere...hardwood floors, headboard of bed, etc. Ah well, they're worth it!

Oh I bet it was a hoot to watch the cats and the helicopter. We used to torture Abner with a remote control car when he was a puppy. now he can too easily catch it.