This year of school has not been good for Esme.  We have tried to work with them, tried to show what we think the issues are.. and the school was very dismissive or non-receptive of our ideas.  In fact, I upset the teacher because I had a different point of view about the causes of Esme's defiant/disrespectful (as she put it) behavior.  They were also giving her 'differentiated' work - which claimed to be advanced and working ahead.  We asked if she could be moved to second grade twice.. because even the advanced work was far below her.  We were dismissed each time.  She can't be bored, she is 'unengaged' and 'distracted.'  We discussed that a lot of the clash was personality and group dynamic - having to wait for everyone to get seated she was already in trouble before things began for not remaining seated, not looking the teacher in the eye etc etc... They said she had to learn to follow the rules of sitting still and quiet when told because she would use them in her job 'someday.'

Her home behavior and personal belief in her abilities were suffering wide mood swings that related directly to her behavior 'treatment' at school.  Some days I had to coax her out of bed in the morning with promises of math equations, and tests..   But often she said she just didn't want to go - she would be on red again, and she wanted to stay home rather than be in trouble.   One day she said her 'math was too big' for them... for the math they want her to do,which is 'small math.'  We tried to send her extra work, but they didn't have time for it.  There are days it felt like the extra stuff we sent her were used to get her in trouble for that day... she couldn't be doing that or bringing it to her desk if the teacher didn't explicitly say she could.  The teacher was (acc. to Esme) ignoring her hand because she raised it so much, even to the point she couldn't go to the bathroom.   She was so confused about how she got in trouble, as if it 'just wasn't under her control'..for different reasons, daily. Sometimes it was other kids, sometimes her own boredom, sometimes it was just a disconnect with what was going on or being a bother to the teacher.  The teacher refused requests to write reasons down, citing time issues.  Esme's 'guess' of why she was in trouble was different than what the teacher would say if called or asked at a meeting... then we were left with who to believe?  It was a constant source of stress.  She usually came home saying she 'loved school' but it felt like it was something she was 'supposed' to say.

Sometimes we had no idea why she would say some of the things 'I can only be a cleaning lady - that will be my job.', or 'I can't think about (math/spelling etc) it makes my brain hurt,' , 'girls can't do math', 'can't say something is stupid - that is a bad word', 'I only have to do five - we'll throw the rest away/leave blank etc..', 'I'm not a good singer' or 'I can't try that I'm too shy' or 'The words are too small, kids can't read that.' etc etc..  We thought a lot of it was just her being six and being around so many other different children.  But, more and more - we thought perhaps they also are criticisms or ideas being implanted from adults at the school.  Her language issue - trouble with abstract words and time concepts, gets in the way and causes communication issues.  Her language has improved tremendously - but she still lags behind a normal 6 year old child in being able to tell what she did today, in what order, and why/how.  Contrast this with her intense attention-to-detail on other things, photographic memory and advanced reading ability you end up in all sorts of strange conversations where the adult has to think outside-the-box to keep everything straight and avoid conflicts.  As her parents, we expect the conflicts - interpret and sidestep them as needed, and end up with a working relationship that respects both of our opinions and the needs at hand - from washing dishes to studying math to daily errands to discussing manufacturing, animal biology, volcanoes and more... The short part is.. we consider this to BE parenting, for us - and it is not something that they can do at the school.

Every situation she said she got in trouble for the teacher had some other description - sometimes 180 and sometimes not even related to what Esme thought the bad mark was for at all.  The teacher was resistant to giving us more communication to help us sort out the knots that came up daily, insisting she was disrespectful, she had no time for such things (her kindergarten teacher did, and Esme came to respect her and love her) because she had too many others to work with.  We tried to say she needs more context, discussion - a chance to tell them her view which is often very different than other children her age.  We listened to their descriptions of what happened and understood completely why she reacted the way she did - and they were oblivious and even after we told them the 'key factors' we understood, they blinked and stammered.  I said if they had just asked us - let us know they were having an issue with this,or that...we would have made it clear for them.  Apparently, she is different than almost every other child they have ever worked with.. our suggestions made no sense to them, and our description of motivations for certain behaviors were not accepted as having credit.  How were we supposed to know?  You could have asked.  They didn't have time - shouldn't she just buckle down, straighten out and follow the rules because they tell her so?

The other complaint they had was why does she have to question all of the rules when she is the child and they are the adults? 'Not even my own children talk to me like that.' Well... ours does, and we listen.  Respect earns respect, authoritarian responses and corporal punishment, with this child, earn distrust, disobedience and eventually, a full avoidance whenever possible.  They wanted us to get her to mask her feelings - she can't show anger or tell them that things are too easy or that she wants to do something else.  Why not?  She might NOT be able to do something else - but we do allow discussion in our house unless it is an immediate safety issue.  Then she sees that in our voice and expression and knows that we truly are protecting her and we will explain later.  We were seeing our creative high-energy complex child say 'I can't do this, you do this for me - I'll watch' in circumstances where she used to sit for hours and work on complicated models or computer building programs.  She was opening a book and saying it wasn't her age level, so she couldn't possibly read that.   There were also several situations that were just handled unjustly, in our opinion - even upon hearing the teacher's explanation.  She did not know why we would not see it from her point of view.

And there are other reasons.
Esme wants to build models - Lego, dioramas, detailed maps and craft supply creations.  When we told her we might teach her at home that was her very first response.  And we can build models? (which they 'can't do' at school)  Yes.  And there can be books about outer space?  Yes,and all other kind of science .. and even use the index in the encyclopedias.  And she can learn math at her own pace instead of having to do thirty repetitive problems to get a gumball...she can LEARN.  We can go places, try things like music lessons, we can see real jobs, research topics she wants to learn about, and budget supplies to do cool things.  She doesn't have to look at the AGE on things she wants to do, she can look at what she wants to do.  And we understand her more of the time - and will buckle down where it is needed, like not bouncing around a project, using proper language to us that is constructive and not disrespectful (which is an entirely different thing to us), use multimedia on every project (computer, photography equipment, audio recording for her speech therapy, video and computer tablet if we get those set up), draw, paint, run, throw rocks outside...

So here we are.
We are getting the papers to homeschool this week.
Before she went  to bed last nigh she traced the calendar days on her wall - and said she didn't have to go to school tomorrow.. she had a soft but slightly giddy tone to it.. she said she could think about MAKING the beautiful toys in her head and the outer space books she can read, and I told her even if she was in the darkest place in the forest she would still have what is in her brain and her heart with her.. that is the most important thing. and she said even the crazy things, like boots dancing, and raccoons.. ha, yes, those too.. dream big dreams. 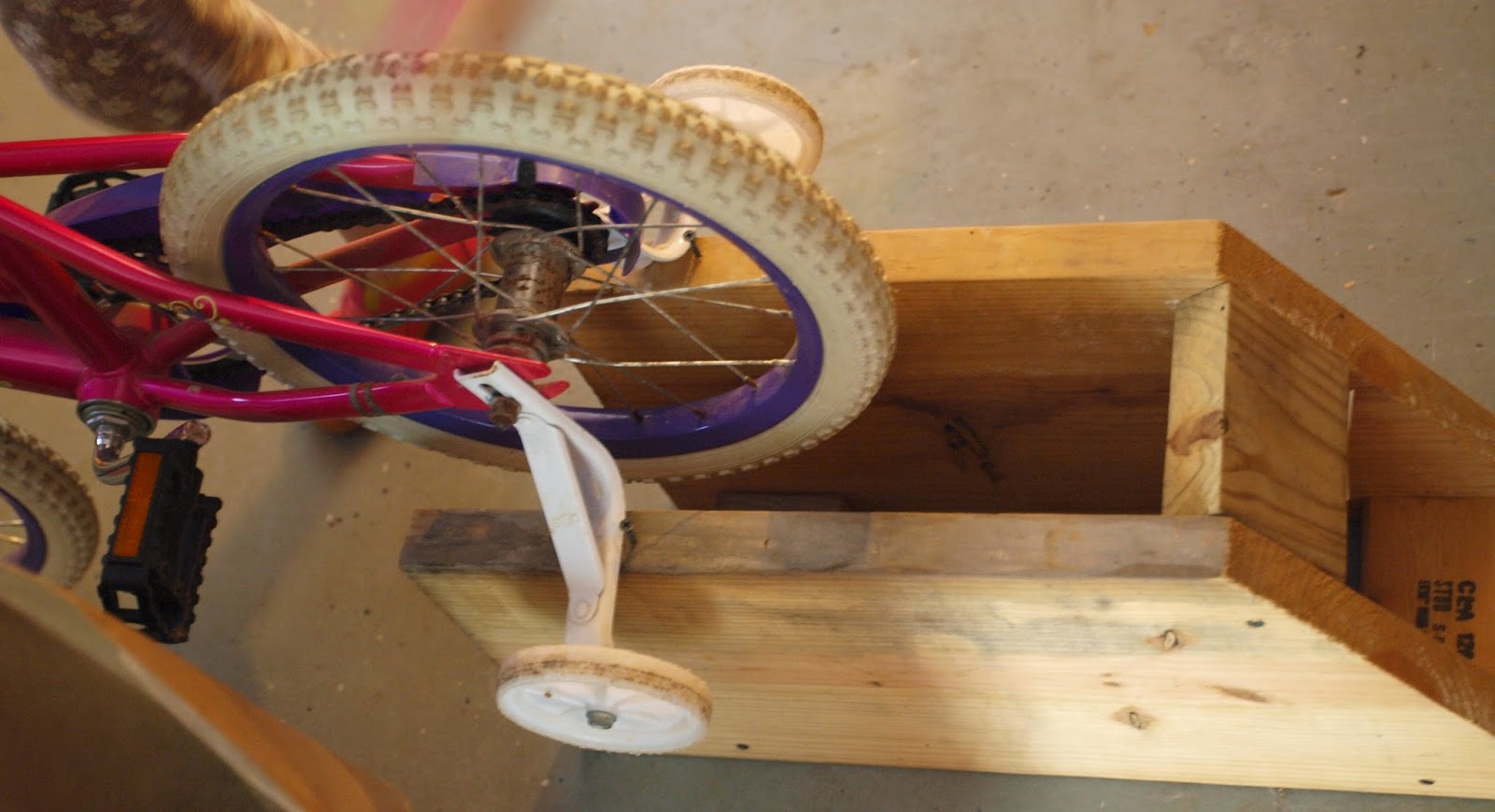 Mark thought up this out of our scrap wood in the garage.  It holds Esme's bike stationary so she can watch TV or read a book and still be active.  She was trying to do both at the same time, anyway - so it gave him the idea.  She helped him make it and has been on it constantly ever since. 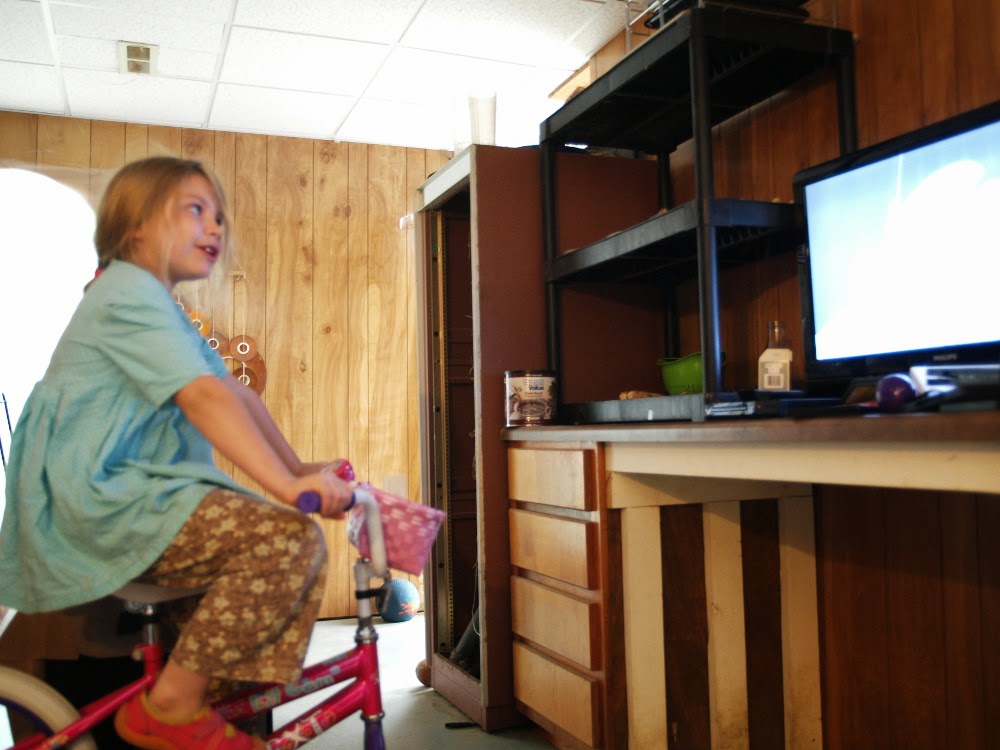 Back on the bike moments after finishing lunch and watching an old PopEye cartoon.
We also went fishing today, discussed science topics at the lake and played Frisbee outside.
Tomorrow is library and more regular educational things.. I have some leaves and was going to do some experiments with paint and sugar and the leaves with her tomorrow as well.

Mark has audio equipment and has been doing 'playback' with her for speech therapy, so she can see what she sounds like and try to correct things herself.  They did that at the special school with her years ago and it was a great help then.
Posted by RheLynn at 5:16 AM