8.30a    - painting -- will add the pictures to the post later...
Esme did a painting that is a 'King kid who set down his crown on a mushroom, which has a bean growing under it, and a flower, and grass... the kid has a grass stain on his sock, because he is a kid.'  I tried a painting of some flowers :) 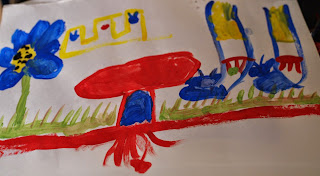 I gave Esme the schedules of some of the free 'museumy' things around here.. she really liked that idea.  She had wanted to go visit one and see what they had there - when we were painting this morning.

She had lost a tooth last night.. one of her last front baby teeth.. she was a bit upset the tooth fairy left only a few coins, and not a toy.  I had such a headache when I got in from work she did her snap circuits with Daddy instead of doing something she had planned to do with me.  I was still not entirely 'good' early this morning - and I thought she was tossing things around in the video area downstairs, but she was really reorganizing, moving a table from her room, clearing things in her room to make more room to sit etc etc.. she made a teaparty with her teddy bear and was drawing pictures on post-it notes this morning when I suggested painting to her.
Posted by RheLynn at 8:13 PM