Sally and Willow go to the vet 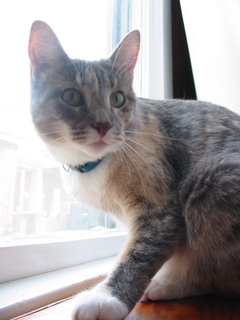 Willow after vet
'Are they coming for me again?' 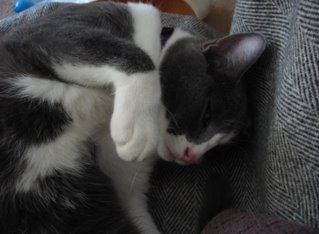 Sally after vet
'Go away now. I'm not talking to you anymore today.'
Everything turned out okay - the biggest thing was their feline leukemia test. They hadn't had one last year, and Sally had been exhibiting some strange nasal dripping symptoms - which had worried me for a few months now. They are both negative, which means they will have long lives with us :o)

They received their vaccine for FLV and boosters on everything else. The vet also said there was no respiratory issues with Sally - so the nasal thing might just be because she drinks out of the faucet and it leaks back out? Don't know - it is still strange.

Big shock of the day: The bigger, less-active cat is NOT the heavier cat. Weird, huh? Sally weighs 9.5 lbs and stands at least an inch shorter than Willow. She is the active, hyper-I-got-to-get-that-toy-or-bust cat. For no apparent reason, she'll race around like a spider monkey hyped up on coffee. We call it 'seeing imaginary bats.' Willow gets really worried about her at these times, and goes to sit up somewhere high until it is over. But.. *drumroll* Willow weighs 9 lbs even.

I'm flabbergasted. Looks are certainly deceiving ;o) but hey, either Sally has more muscle or just some very weighty opinions going on! (not my quote)


Afterthought: And they had to wear COLLARS! The shame! Both of them were wrested into their 'travel collars' with their names and a phone number stitched/drawn on to them. They sat there for hours before the trip just staring at me like 'This is NOT a good sign Mom. What's up?'
Posted by RheLynn at 9:57 AM

Glad to hear they both got a clean bill of health! Hope that Mr J is feeling much better now too!

Glad they are both healthy. FeLeuk is a nasty thing. My cats know something is up when the carrier comes out. But they don't know who's going, so they all hide.

Glad they're both healthy! Maybe Sally has denser bones?

Definitely happy about the FLV results.

Very glad that they're healthy! Hee hee - my cats have the same reaction to their "travel collars."

Awww. Glad to hear that they are both happy and healthy! I always feel guilty after taking any of my clan to the vet...they make me feel like a traitor!