I finished McCalls 8001 dress tonight. As Esme says: "I can't love it" But, it does work. Remember it is a size five, which she just barely doesn't swim in. There is room for growth here. Take a look at how the skirt is open when she is sitting, and relaxed when she is standing. That was not easy to get right, and I still think I did it a little haphazard. The ties in the back were essential to not making it stick STRAIGHT out in front of her. Note: These are also the 'wiley pants', although the major feature of them (a flat tummy band) cannot be seen. 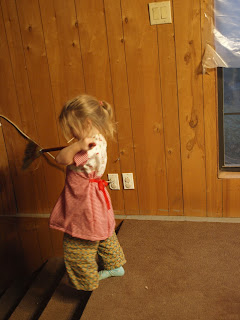 Heading off downstairs with her broom and 'wand' (a pencil) 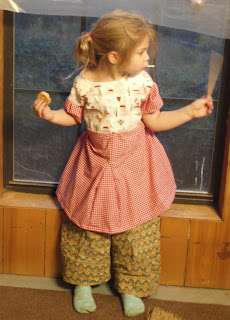 skirt detail and 'magic wand'
It would do nicely with a red ribbon sash all around the middle.
Then I put her hair back up, so she could see and I could see her. 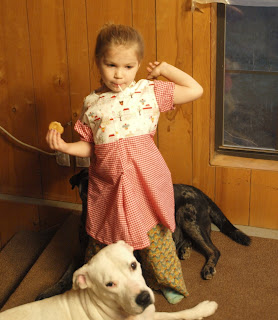 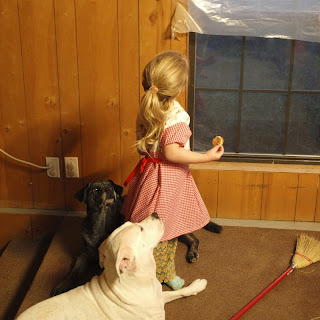 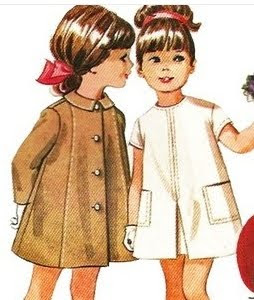 The reason I bought the pattern was for the coat, which is still to come ... the dress was just tempting and fit the type of fabric I had on hand better, although I did have to piece that, too -- the two color version of the dress was due to not having enough of either to make the whole thing. 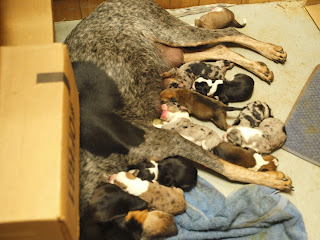 And a better shot of Nova's puppies

She is still very protective of them and has not left them for very long at all.

Now for cupcakes, as the laundry and dishes are nearly done.
//note// Esme quote of the night : Upon seeing Lisa Simpson kiss Nelson, and while standing on her head in our bed... 'ew gross. That's a gross kiss.' Daddy and I both lost it. Mark says: 'And... I guess that's four?' (as in years old)
//note// We played with the pattern blocks at her request. They were a very good investment. We read one of her easy books together and she knows more words by sight than she used to - mostly color words and a few words like 'and', 'the', 'come' and 'for'. That is all from Starfall. She said the word 'sleep' was 'sheep' so she is just memorizing the look of the words.