bits of bits and homefront

Esme came home early from school today, saying her stomach hurt.  I put her in a lavendar bath and then told her she had to sit in my bed under a blanket until her hair dried.  She has been bouncy since, and eaten two meals... hope tomorrow we are good.

Mark and I did just a tiny bit of Christmas shopping before we got the call... and we happened to be in town, so it was a quick trip over.  I've done a little writing on Niume, a book review, a story about one of our cats, and a layout of a novel I've been trying to write for a year.  I have 3500 words on it but have deleted more than twice that.  Its going to be a dark psychological dream type theme and I keep telling myself to be less vague, less wordy and more upbeat.  But .. that is killing it.  So, I need to let it flow out and take my editor cap off.  I did another chapter today and got some good ideas for taking it forward by adding first-person voice to the other two characters instead of just staying with the single viewpoint.  I always like it when they do that in books... and it adds some depth to the  characters, too, to know what happened to them from their own viewpoint before they ever met the others etc.

I've finished three books this week, maybe four.. and am starting on a new one.  These ebooks go fast - which may be another reason I'm not sure I can form up the whole story in the space.. and keep paring it down. 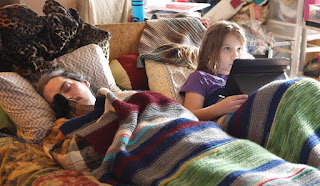 Daddy fell over and went for a nap after we got back from town.

The face I get when I ask her how she's feeling this afternoon.

I also spent about ten hours over three days painting the holiday murals at my store.  I think they turned out good - but there are more additions others have to make now to put everyone's ginger bread people in (with employee names) and a suggestion for more 'gifts' for other managers other than the Zebra that came up while I was painting. 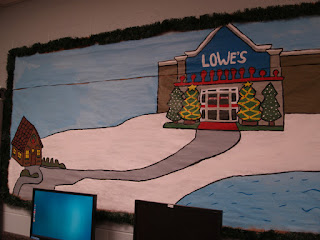 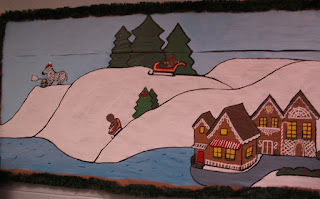