green raglan sleeve by the instructions... 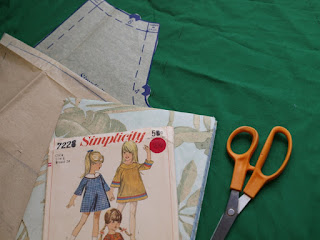 This is not the droid I was looking for - a pattern along the same line, though - maybe.  I am trying it out actually following isntructions for this plain green fabric we bought on clearance.  If I like it - it might be expandable into another design with the red and gingham fabric.  I also ordered two much more 'modern' dress patterns - the frilly layered shirred ones that all of the girls are wearing that look like broomstick skirts layered one on top of the other.  Esme saw a friend wearing one and then another girl on the computer when I was looking at fabrics, and she expressed she wanted one of those - was it too expensive?  No, but not something I have at the moment - or feel confident setting out to design at the moment... so cheap pattern it is - and it will probably be here next week, with lots of time to try my hand at them before summertime. 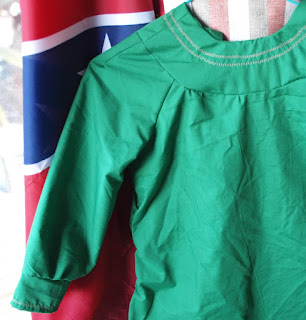 done - it looks about the right size, will have a try on later.
I laid it out over the blue dress from November and it seemed the same size, sleeve length and just a bit longer in the skirt - so hopefully?
The back facing to zipper area was very fussy, and I made the cuffed sleeve version which is unusual for my style of sewing -- and I think it worked out okay.  There was a point I wasn't paying attention I spent ten minutes trying to attach the yoke upside down..and then righted myself and continued.  I used a fancy stitch on the machine to give a bit of extra to the otherwise plain color - Mark said I should stitch a symbol of the Dragonborn on it for Esme as we are playing Skyrim as of late and it does resemble some of their clothing.

Later:  Esme is running a high temperature after coming home from school with a stomach bug - she ate lunch and played at Grandma's but was home and sleepy over dinner, falling asleep by 6...  an hour ago (10 pm) I gave her some tylenol and a bath and it brought the fever down for a while... seeing if it will hold.
Posted by RheLynn at 9:12 AM

Heh, I forgot I had made that reference that is how 'normal' that sounds to me ;) Esme said this shirt was not so pretty because it had no glittery things on it... her criteria in clothing is definitely evolving.