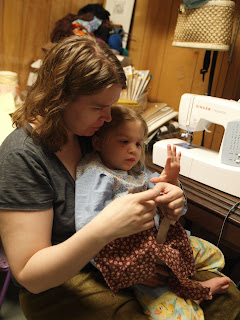 Watching me sew - she insisted. She kept trying to guess what I was going to do next with the machine and imitating the sound and motion of each bit. It was pretty funny. Then I asked Daddy to get a picture of this because I realized she probably won't FIT on my lap like this for very much longer...


I have to go to work now and it is snowing HUGE flakes!

LATER: I came home from work early just in time -- the truck acted a lot like a sled for the entire way down the back road here. If the slush had frozen over (which it is supposed to tonight) it would have been impassable.

After I had been home for a bit we all went out and made little snowmen and threw snowballs at each other. Esme had a grand time and didn't want to come in. Nova the puppy ate one of my snowmen TWICE when I was looking for sticks and rocks to put in him. It was funny - because she waited until my back was turned both times and Mark saw her do it out the window the first time - and I caught her in mid chomp the second time! Esme was pretty good at throwing snowballs once she got the idea - and we all laughed a lot.

This is the remake of the blue day dress - in some other fabric I had lying around that isn't a wonderful match but is good enough. It is what I am holding in the pictures above. Esme 'helped' me make it last night. I told Mark she could be a red breasted robin for spring ;) He said I should make an embroidery for the front of it as a little bird.

It seems to fit her quite well, the only place it pulls now is the place where the ties pull it back --- which is good. It still has the 'second arm' problem where she has to slow down and not throw a fit for her second arm to go in nicely - or else she gets it caught up inside.... I really don't know why she doesn't have that problem on her cow dress or the Cinderella dress -- I need to look more into that.
((<--this dress pattern has back darts at the waist and shoulder.. the other one doesn't. I wonder what would happen if I made it without the darts? Will compare the two patterns some more on my desk before I do.)) 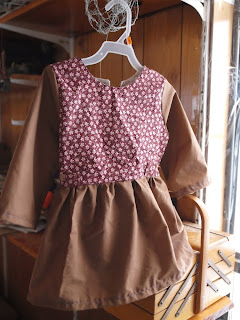 not too interesting on the hanger 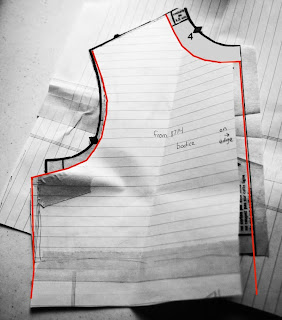 An idea of what is different about it.

The orange lines are the new pattern. Then I cut the back of the dress bodice to match the changes and made the sleeve narrower.

The other projects I am working on that are not posted about yet : Socks for Esme and slipper socks for me - each have one done and the other started. A pair of old fashioned legwarmers for me :)

We have been giving Esme piggyback rides but she calls it 'I ride the turtle' - her own description from seeing Otis in the movie Milo and Otis ride the turtle to shore and playing with her bathtub turtle having her little figures ride it. It is very funny to hear her say that!