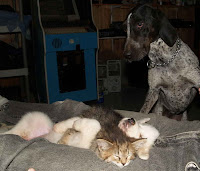 We've been busy almost since we touched foot back here after the flea market on Tuesday. We have three large stacks of vinyl LPs to catalog, categorize and post to Ebay, along with our regular activities. We're also looking into further expanding some of our technical abilities here in the office. I've been adding some rows onto the circular shawl, and of course there is lots of puppy training going on as well.

We're still deciding on a name for the pyr' - but she has shed most of her shyness and is trying to throw her 'weight' around with the pack, which has led to mostly laughter and some important puppy lessons about who you can and who you can't push around, even with fluffy cuteness and whimpers. For example, Misha, who is the kitten guardian extraordinaire - has told this puppy she is not mommy, but drill sargeant. She has taken a firm paw in telling this pup what she can and can't do. Which, considering this pup will grow to be as big as Abby was, is probably a good thing.

Btw: Jeanne asked how big our animal 'herd' is now:We have three very-large dogs (about 100-120 lbs each - it had been four with Abby), four medium-size dogs (about 60-90 lbs each), and one 20 lb. dog that thinks she's a cat. Now, add on this puppy and that makes nine once again. There are also two cats, a kitten and a goat. Remember, this is almost a farm-like atmosphere, out in the country. The big dogs have a fenced-in yard where they can run with the goat.

Personally, I hardly notice there are this many 'critters' until dinnertime! :)

Wow! Dinner time has got to be quite exciting at your place.

Love the idea of a petting zoo!

What a great friendly bunch they all are! So what are you going to call her?

Oh my gosh, the cute! The cute! I love Pogo crashed across Pyr! And Kelba standing over them.

And who are they sleeping on? So. Dang. Cute.

CarrieK: They're sleeping on Mark's legs and I'm holding the camera. Kelba is particularily upset because she wants to sit 'near Daddy' and there are already baby animals being cute there.