A Mouse, a Pogo and a Color Question

I found these two asleep on the stairs to the basement last night. Of course, Mouse attempted to deny the entire thing. After all, it's a kitten... who wants to be associated with a kitten?

Note Mouse's one slightly slitted eye in this pic... 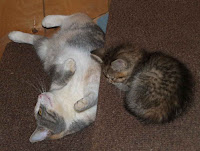 What kitten? That kitten or me? 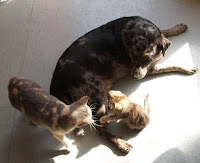 Mischa, the dog who licked Squint's ear, also is confused about this kitten. She thinks perhaps she is supposed to be babysitter again. This morning she was keeping Mouse and Pogo from playing together. Maybe she thinks Mouse is attacking Pogo. Just after this picture she snapped at Mouse and herded Pogo over to the door to be licked and checked over. Later Pogo and Mouse were playing again bouncing around packages to go in the mail and having a very good time together... while Mischa was outside.

However, it is good Pogo has an attentive 'babysitter', whether it be dog or cat. We've been allowing Pogo to go outside near the porch the past few days. She always has one of her 'babysitters' sitting nearby watching her. We've seen a hawk in the valley (on the other side of the house) which would be worrisome if there weren't several large dogs to bark and notify us to kitten dangers, or two 'big cats' to run up to said kitten and say 'take cover.'

Slow-knitting on the socks. I'm trying to decide if I want to continue with purple and blue striping for the circular shawl or add in another colour from the new Palette yarn that came. I have some lighter blue colours, a lighter purple and red Palette that could be alternated somehow. 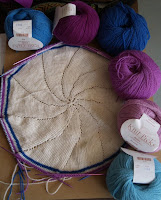 There are three blues(Lt,Md,Dk), three purples(Lt, Md, Dk), and white. Problem is I've started with the darkest blue, and the medium purple.. and wondering where to go next.

The photos are great.
I like the colours for the shawl.

Are you going to make pinstripes?

I'm thinking bulls-eye type stripes by just changing the colour as I work around.

I thought maybe the dark purple would match my Morning Glory sock yarn - but it's slightly off. The medium purple matches better for making the sock heels and toes.

Or - should I be really crazy and put in a red stripe now?

Go with the red stripe! It would be random and cool.

I love watching the interaction between the furbabies. They have their own society! I know our cats surely do.

Aw, it's good that Pogo has so many caretakers!! And those are excellent colors for the shawl.

Misha has a long tradition of mothering, including Squint. Its one of her main reasons to exist, she says.

I say its because she's a unique silver color, but she wants to be useful.

I keep telling rhe to knit the shawl in white and tie dye it later, but the whole psychedelic connotation puzzles and scares her, i think.

I love your shawl - it's great to watch it coming together. Pogo is such a sociable little kitten :)