I started on a linguistic journey this year in January, it's October and I've made a lot of progress.  I started out with only about four or five of these languages - and then added them in twos and threes until well, here I am with about twenty.  I read the story about Vaughn Smith in the Washington Post earlier this year (about April, when I added Czech to my list) and was very inspired.  Also, I think, since quitting retail a few years ago my brain has opened up thousands of slots that I used to keep all the product in at work.. I've added five postal routes to my brain since then but it's not quite the same as keeping thousands of plumbing parts and many more thousands of other items in the store in your brainspaces, as well as catalog items and websites to order from.  I described it to someone a week or so ago as 'getting the keys back to my brain'.  I'm also auditing a free college course in comparative linguistics.

Anyway, long story short... here is the chart I made tonight of the progress. 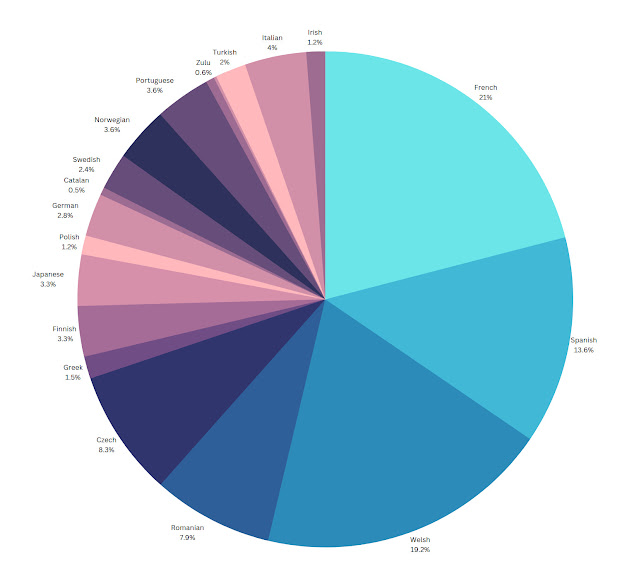 French is my L2, from my grandmother and I could probably hold a good beginner's conversation in it and/or Welsh with someone.  I like to listen to French music on RadioGarden, and try reading books and news articles in French.  For many years I've had French 'going through my brain' as an undercurrent, not always understandable except in bits and pieces.  I've tested out to A1 in French, but that is because I'm not actively studying it as grammar and tests like to be so specific.

started learning Welsh in 2017 with SSIW and DuoLingo, really like it, it pulls on the French structure already in my brain, I'd like to do the Mynediad, I have watched TV, cartoons and listened to radio and podcasts in Welsh and really enjoy it.  I belong to a Welsh group online that always has something to read every day and little conversations

studied Japanese a little here and there in the past for anime, but did not study hard - but it's something I could pick up better if I focused.  The hiragana characters were easy but of course kanji is harder if you don't do it enough to retain.

don't like Spanish, but it's getting better.  It's much harder for me than it should be.  It's like someone is wiring around the backside of my circuit board to make Spanish work at all ... but it got better when I mixed it with French, then Portuguese.  Now, learning Catalan 'through' Spanish I'm cementing the Spanish a bit more, too.

found affinity with Romanian, also speaks back to the French bit in my brain, this is a hard one to pick up and put down, though.  When I started trying Greek I found a crosswise reference in my brain to the Romanian - so studying them together might help

Czech seemed to occupy a space between the Romanian the French and the German, I've started reading some in Czech, paper book and websites

Someone suggested I try Swedish, then Norwegian - both are okay, but not prime interests

learned some Portuguese to try to get the Spanish to set straight, and to prepare for Italian

tried Turkish because it was on the other side of the 'linguistic map', liked it

someone showed me a news article in Catalan and I saw it was available only through the Spanish learner site on DuoLingo, tried it anyway, it is between French and Portuguese and Spanish, very interesting, will continue

picked up some Polish because it was similar to Czech

Zulu because it as new, Korean to take a look at the script for something

picked up Greek recently to try to understand the Greek-Sanskrit-English comparisons that were being made in my course, the Greek alphabet wasn't too hard to learn again as my daughter tried Greek in homeschool and we learned it then - soundwise, it sounds like Romanian mixed with some Spanish and/or Portuguese

summary - My goal at being a polyglot may be coming true, I am retaining most of what I learn and by switching off and on between the languages in 'rounds' and 'spirals' I find what I'm needing reinforcing on and love feeling that 'switch gears' feeling between one langauge and another.  I will study four or five languages a day, sometimes - but stick largely to three or four intensive choices for the week that I want to make progress in

January 14th will be one year - will see where I am then!