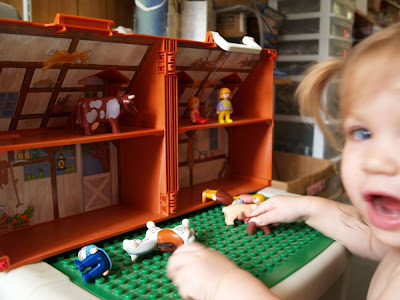 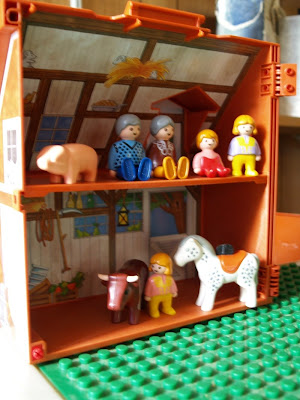 UPDATE: Here are the pictures - it was so slow the other day I couldn't post the pictures at all. The dogs are still missing! (playmobil plastic dogs) It was a small 'thrift' lot from Ebay - so it doesn't have all the things in it that would normally be there. Here it is at Amazon with all the components - but it is out of stock everywhere There is a similar dollhouse that is cute, too!

This is the Playmobil Farm we bought for Esme off of Ebay. She caught on right away that the dogs and horsie and cow go running all over the place and the house opens and shuts. I had some cowboy and Indian Playmobil as a kid, and loved it. This is geared towards a younger child than the set I played with, which had little guns and headdresses and hats that snapped onto the cowboys and Indians. Esme has already misplaced the brown and black dogs that came with it - they are somewhere in the vicinity of my sewing machine but neither of us can find them right now!

Esme got to see her grandparents today and had a rollicking good time up there. She went down for a nap almost immediately when we got home. I'm still not sure what I want to make next for crafting - more shorts for Esme would be good, but not as interesting a project as I'm looking for. She does need more - they are much cooler than the leggings even in the house with the A/C on it does get hotter upstairs.

Mark showed Esme how to put on shorts this morning with an example I asked him to perform. He showed her one leg, two leg, and then pull up. She said 'WOOOOWWW, Good job!' and gave him applause. Silly kid. She also said to me over and over she was (already) 'ready' when I wanted to put her hair up. I said 'you're not ready - let me put your hair up in doggie ears' (pigtails, but she has never seen a pig so I call them doggie ears) She grabbed the brush and ran towards the stairs calling 'ready ready ready'. She doesn't like her hair being put up - but it is long enough now to be below her nose in the front!

*sigh* afer today I have a week straight of scheduled hours and then Sunday off - and then another four days on and a Friday off. It doesn't seem like a lot even though a lot of those days on end at 3:00 in the afternoon.
Posted by RheLynn at 11:43 AM

Glad you found the dogs! Too funny.

No ideas at all, I hope inspiration strikes you!