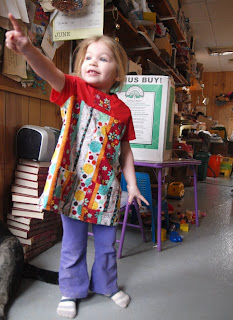 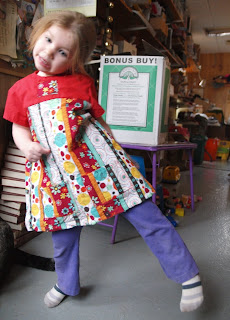 We are getting closer and closer to 3 and a half. Esme acts her age very much lately. Physically she is ready for more PT, and is making some progress with it. She has the dexterity to pick up single pins off a table and put them into a pincushion without any help. She may have had this for a while, but it impressed me when she did it. She is still trying to open the front door but can't get a good squeeze on it to turn it at the same time. Daddy says she has been making good efforts at climbing trees outside vertically and I've seen her do some impressive horizontal balance beam work the last time we all went for a walk together.

Her speech is much closer and she sings long bits of songs to us daily. She can count to ten and somewhat higher, but not reliably. She still knows all her letters and can now tell you her name, her full name, and the first names of her daddy, mumum and grandma (working on grandpa - but I'm not sure if she saying grandma's name or grandpa's name because they have a similar middle sound and she runs things together)

She is describing things to me more than ever - things she saw earlier or things she wants to do or have etc. Daddy says this morning her description of 'I want an apple jack bowl with milk and a spoon and a fork yea, I hungry!' Sometimes I understand it, and sometimes I don't get it until much later if at all. Yesterday she asked for a movie with 'baby rabbits and they make soup'.. then she asked for 'movie with fox' and we knew she meant the Robin Hood Disney classic. I still didn't pay attention if the baby rabbits really make soup in that movie.. but apparently she thinks they do. Her 'no' attitude is getting worse - she thinks she is in charge and is sadly mistaken about that. I have drug her by her pants in and out of places more in the past three weeks than I had in the month before that. Hah.. I should make her some overalls with really strong straps! But she is testing us, and trying to see how far she can get her way etc..

She is watching Crocodile Dundee right now and saying 'bad dinosaur! - it try to get the mumum and the man SAVE, YAY he SAVE! bad alligator, he save!' She is really understanding more of what she sees and relating it in her own way. She points to me while I am working on cutting out a jacket for myself and says 'You go mumum, you go over there play pe-you-ter (computer), NOW, go.' All of that because I am just slightly in the way of her watching the television screen. Brat!

There are other things I have no idea why she does what she does... like shoving her plastic toys down into her socks and then walking around, or dumping all her plastic letters down her shirt and then standing up and trying to pick them all back up after they fall through back onto the bed. 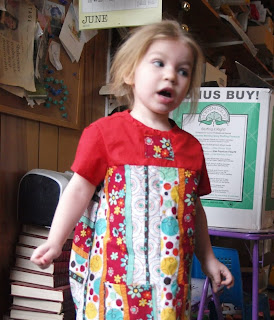