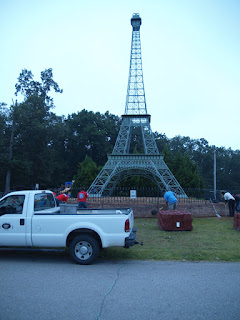 We helped today with the Lowe's Heroes project at the Eiffel Tower park in Paris, TN
It started very early, just as dawn was breaking. 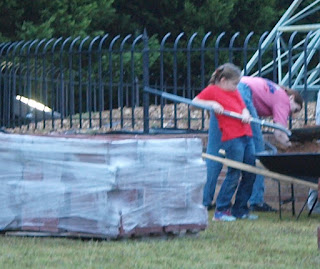 We started by digging and clearing out dirt in the area around the existing wall.
(See below).  The existing wall was cracking and needing to be reinforced. 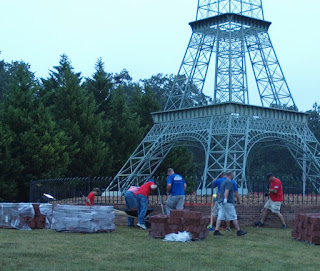 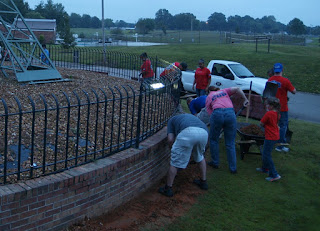 There was a lot of digging.
Then it was time to lift heavy bricks and glue them in place.
Esme couldn't help lift the blocks..but I did have her pay attention to the process.
Shout-outs for J.B and Brian and receiving, who were also helping. 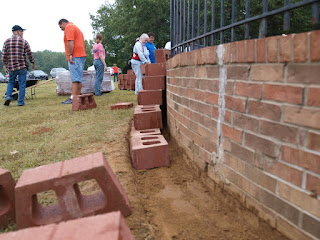 Just one of the cracks that was threatening the original block wall. 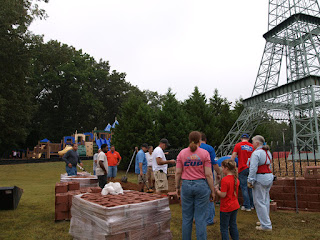 We started to lay the bricks and test the level of the cleared area.  They also brought in an electric hand tiller to get some of the areas with gravel ground down to the right level. 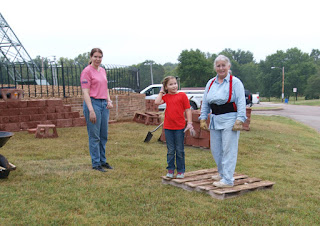 Miss Mary gave Esme a lesson on stability and why we were shimming the bricks as we went. 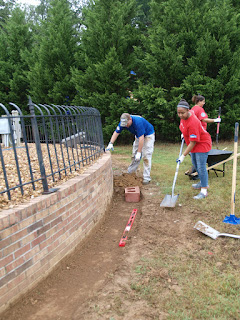 Miss Jayla was helping out from her school, too, with her Mom, Kia and our zone manager Tony. 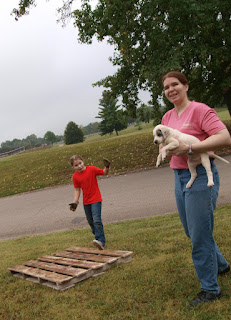 Nibbler came along to act as the puppy construction supervision. 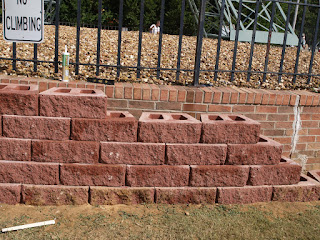 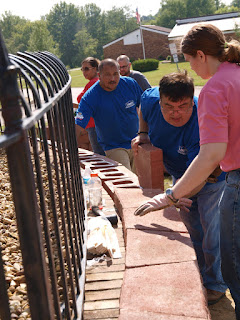 We could finally lay the top layer of bricks on the front half of the wall.  Mr. Joe Martinez, in the background here, was our foreman for the Lowe's team and an expert in laying masonry.  He helped us keep things level and work with problems as they arose. 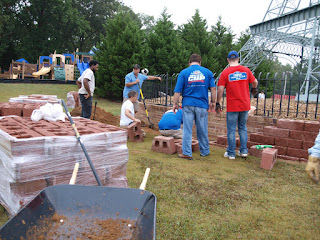 Paris City Parks and Recreation were there to help supervise an lend their expertise, too.
Our store manager Brody is in red, and our Outside Garden specialist Tony is to his left. 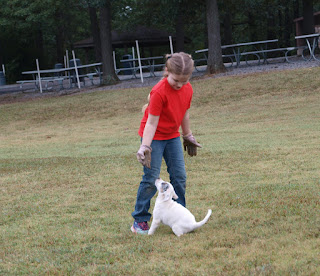 There was playtime in between things. 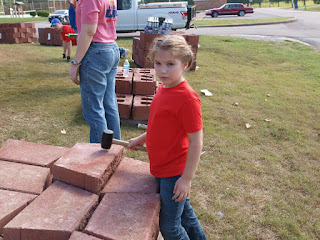 The mallet was fascinating, apparently.
She was happy that Miss Leigh told her what the mallet was for, and the pry bar.
She wasn't as interested in how the blocks actually held together with the lip on the back edge.  I thought that was the fascinating part.  Esme thought it was just normal - of course they go together that way.  Goes to show everyone takes something different away as the most interesting part of the project. 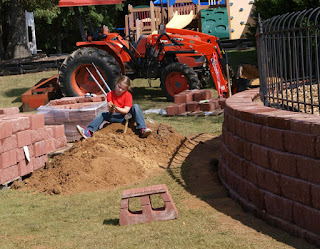 There were also sandcastles made in the extra sand and dirt they brought for the project.
But she really had earned some play after slinging dirt with the shovel like a trooper at dawn. 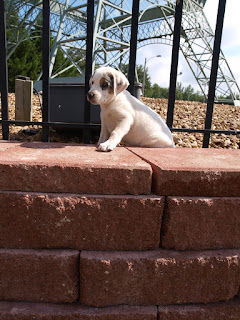 A job well done, with a paw print of approval.
Well, we left about 11 am before the picture crew for the newspaper was coming in.
It was getting hot, and it had already been a very long day for us!
We had dog food to get at the co-op, and lunch to make.
We stopped by home for an instant, and then got back about an hour later.
Esme has been working on Skyrim quests (after her multiplication was done), and has felt very brave.
She is glad we went to help - but now we have one day (tomorrow, Friday) to do a one page report and a Spanish lesson.  That is crunch.  I'm wondering if we'll get it done.

Today:
6:30a - Community Service project with Lowe's Heroes
---We were helping build the block wall around the Eiffel Tower in the Paris, TN city park.  We got there pretty early, and helped remove dirt from the first course's path.  Esme helped a lot with that.  After a bit there wasn't much else she could do - so I helped transport some block and she took care of Nibbler and watched until it was time to get going.  Nibbler the puppy is deaf, and we ended up having to bring him with us today because he would not get away from the car.  But, he seemed to have a nice adventure, too.

11a - break
11:30 - math worksheet, doubles and triples
11:35 -break
2:00 - Skyrim quests - Dragonborn Temple of Miraak and Fate of the Skaal...also some book quest she is on right now.  I'm not truly counting it as 'school'...but she usually runs and hides and asks us for help and she is showing a lot of independence and decision making with it today.  She even stopped when her follower died, reloaded from the last save and fought three hard monsters again making sure he didn't die.  It was a tough choice - but she decided it was more important to make sure he was safe.  Little things.

4:30pm - still playing (with a brief stop at chicken time to feed,water and egg the chickens).  She's on 'Path of Knowledge' quest now.
Posted by RheLynn at 2:32 PM