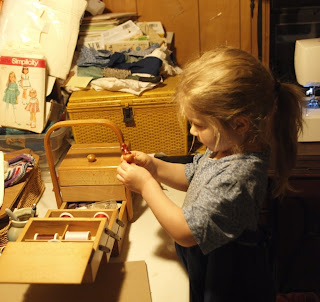 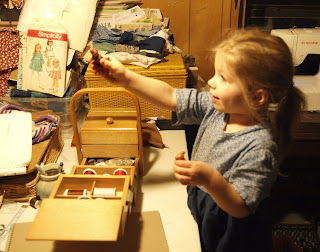 Esme playing with her plastic toy dogs. One of them is new and it is meeting the other one and saying 'I will catch you' to the other dog, just like in the movie Despicable Me from last night. They were playing up and down the 'stairs' of my wooden sewing box that Mark gave to me, pretending it was a precarious surface. Then one dog saw a butterfly out the window, and pointed it out to us. Later she was stretching her old telephone's cord across the room to a bucket and playing almost the same game with other toys. All in very poor light - but it was worth a try to get a picture ;) I did finish her other navy-skirted dress with the long sleeves and pockets on the skirt. I'll see if she will put it on tomorrow. By some odd luck of the draw the pattern that they were made with is still visible in the background of these photos. The scrap remnants of the fabric are there too, on top of my mom's old sewing box.