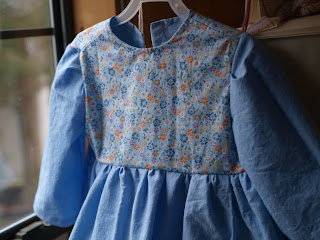 Just another simple day dress I've been meaning to make for Esme. On the hanger it looks a lot like the one she is wearing in these pictures - although I used the pattern from her red dirndl without the dropped waist. The fabric is something I bought in Jackson in December and have really been meaning to use since then for exactly this type of simple everyday dress.

I put the zipper in and put white grosgrain ribbon ties on it after the picture was taken. The ribbon came as wrapping around the blanket sleepers at Christmas - but it is a perfect item for dress ties - just make a little postage stamp of edgebound dress fabric to zigzag securely over the front end and tie knots at the back of the tie. The Cinderella dress (she is wearing) has ties recycled from some other item's ribbon and they were a 'mock-up' at the time when my machine was acting up but have really impressed me in their durability. 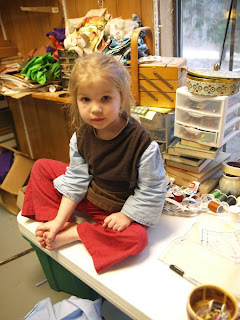 sitting on my table
holding her feet after taking off her socks
I can almost feel her getting taller just looking at this picture!

She likes to sit here on the corner of the table now and 'catch fish'. She was pretending she was also catching Pinocchio like his daddy does in the last part of the movie when he is catching fish and catches Pinocchio instead. She said she was saving Pinocchio catch fish there you are! and pretended to reel him in and ask him if he was alright. She has an 'ow' by her eye here - did that yesterday when I was at work and Daddy wasn't entirely sure how because she told him she was 'alright' several times when she was klunking around the room as she does - and then he saw it later. Her expression is almost exactly like the 38months picture I took of her doing playdough - 'what are you taking this picture FOR?' I told her it was for Grandma and then after that she smiled but looked away from the camera and said 'hi Grandma.' 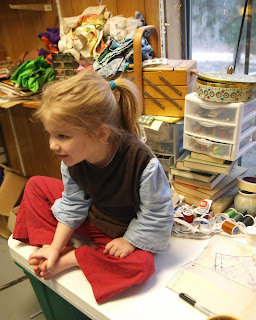 We haven't been up because Mark is still down some with this cold and we definitely do not Grandpa to get any more of it. Also I was having a bit of a dizzy spell myself when I got home from work yesterday - and it lasted nearly until noon this morning before it let me go enough to start working on projects. I think I've had my head down knitting and sewing too much lately - and am feeling the effects that has on that nerve. 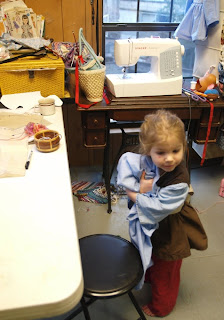 And here she is showing me how much she loves the fabric - and hugging it and trying to take it all over the room. I know it is hard to tell but I really have tried to organize this space some in the past week. I folded and tucked away a lot of the fabric into a plastic bucket, recovered what yarn I could from what had been shoved into a corner and organized the patterns some into 'usable', 'done for' and 'future use' piles. Some of the fabric would not fit, so it is still stacked on the chair, mostly lining material, but that corner there was nearly full of fabric stacked up to the shelf, before... not all of it usable. The plain blue fabric for the dress skirt was one of those stacked on top of the shelf - and it has actually faded a little in the sunlight coming in that window. What a lesson for me! I thought that was a worry only of the past. I probably need to invest in some sort of high-up double-door wall cabinet there for the good fabric to put in and then put a lock on it so Esme can't get into it.

I have tomorrow off as well - but we need to grocery shop. Esme went to sleep very well tonight after I read her four books on the electric blanket on the bed *hehe* that blanket is like knock-out juice for all of us when it is cold. I admit I turned it to medium on purpose while she was sitting on it with me in hopes it would make her settle down some and want to sleep. It worked. After the fourth book she was lying there nearly asleep. I was talking to her about what I was doing - knitting a sock, and then I said I was a mumum good at making things (she nods) like the sock I was knitting and making dresses and pants (nod nod) and I like to do those things. Then I asked her what was Daddy good at? We said Daddy was good at cooking pizzas and chicken and bread - he cooks very well, he is good at that and likes to do that. And I asked her what she was good at - and she thought hard - I said she was good at singing and playing? (she nods) And Daddy said she is good at making bad smells and being loud (she looks confused) I said yes - but we we like her singing and playing. (nod nod) And then I asked her if she was going to go to sleep and she said 'no sleep I play' while her eyes were closing even then.. and within minutes she had konked out.

I bet I'll be being asked to 'come come little feet' at about 6:30 tomorrow morning again...