Esme was up bright and early at seven this morning after fighting hard not to go to sleep until 11:30 at night. But, she had a long nap yesterday after a busy morning outside playing with Daddy in this warm weather.

This is the blue fabric Esme picked out for herself. As soon as she put it on she told me 'go get da CAMERA'. Hmm. Is that because she likes it so much or because that is what Mumum usually does with a new dress? Hehe. Maybe both. She told the dogs she had a pretty blue dress. And she has learned to curtsy even better from Alice in Wonderland. It is almost exactly the same pattern as the 'blue day dress' with a slightly lower neckline, no waist darts and short sleeves. The skirt lost a tiny bit of fullness with leaving out the waist darts but I had no trouble with her arms in this one... ?? It does not have a dropped waist - without that, the dress looks like it is too small for her - but in actual performance running around all day, a dress like this seems to work well on her. 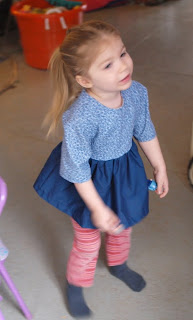 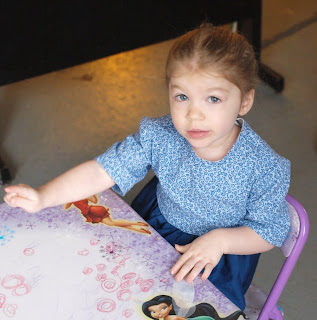 not sure if she wants playdough or breakfast

She decided to serve all of her playmobil family tea and give them lemons to eat. She brought everyone over on her own - arranged plates and food and then I showed her where her 'teapot' was and she started giving them all drinks of tea. The baby jumped up and said 'I wanna tea TOO' and she told him he could have some but then went on to play with the rest of her menagerie of little figures - cats, mice, monsters, horses... The grandpa took a ride on the playmobil horse all around the room and then came back and said 'I came home!' and put the horse away. 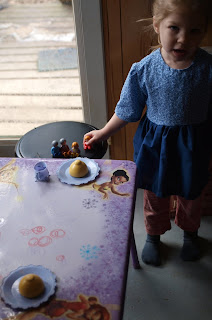 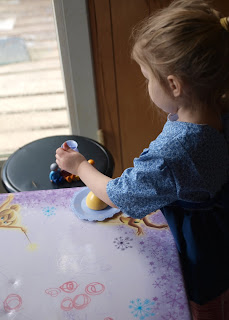 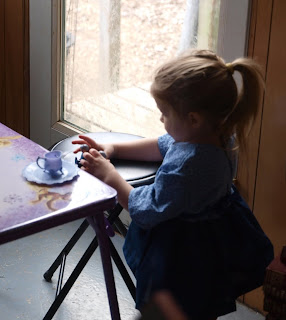 I liked this last one because the skirt of the dress is very well defined. On her it actually does not look this full!