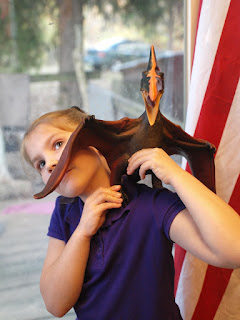 There was some major bravery at the dentist this morning,
including a birthday tomorrow, so some giant dinosaurs were gifted :) 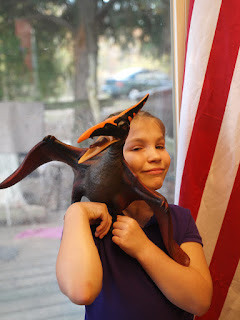 2.30    - minecraft : work on a new house
3.45    - multiplication worksheet, Khan math
---3 times table worksheet, perimeter and two mastery challenges on Khan
4.00  -IXL English, plural and single possessives
4.15  -We talked about : what is a chemistry mole? // We are downloading a chemistry version of Minecraft and looking for more resources on DNA for her age group.
done

I was reading the last of my book while she was shooting math problems at me. I hope that was more coherent than it looks like in text... it seemed to be because she discussed it with Daddy today when he was asking me the square root of 149... which I deduced had to be more than 12 but much less than 13.

//I've put 'Cracking the Code of Life' and 'What Darwin Never Knew' on her DVD queue for the next few weeks.  We've also got some more early history of the world coming.  The Romans series was a little 'deep' for her (Daddy said, and I agree), but she really got quite a bit out of it.  We'll continue with more American History later in the year, too.
Posted by RheLynn at 2:33 PM