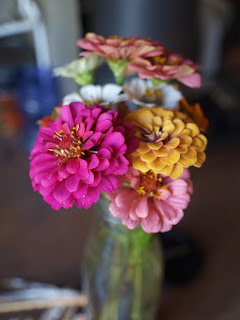 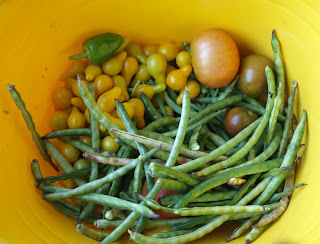 harvest
A few tomatoes, two peppers, lots of black eyed peas and a few assorted other cowpeas. About two quart bags of green beans, and another of yellow tomatoes. I gave all the split yellow tomatoes to the dogs and they ate them right up. There were enough field peas shelled out to fill one of those larger sour cream containers, about a pint, I think. 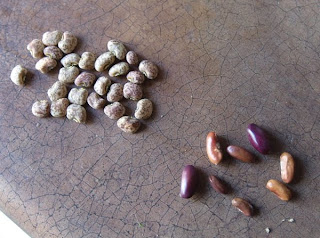 The Provider green beans that I left on the dying bushes are starting to dry and produce dry seed for next year. I am so happy I let them dry.

We have a HUGE cardboard box from work that I brought home last night - it is about four feet square. I intend to toss that out on the lawn after we get home from Grandma's today and let Esme go to town with it. I have some paint and a brush - I might even let her do that, but would need to look at which clothes she has on first! Mark said maybe let her do that on a warmer day and have a camera ready and a garden hose. It is a bit cold out today - don't know if we'll have another warmer day!

Esme cracked me up earlier with this: We were downstairs washing vegetables and she looks up at the ceiling. Daddy is upstairs coughing with his corncob pipe. She says: 'Daddy. He smokes. He coughs. *gets pouty look and shakes her head* He supposed to learn to be a dragon! Not good.' I had a really hard time not laughing out loud because she was so very serious about it. Mark said she hadn't told him that one before but she often tells him 'gesundheit' or asks him to excuse himself after he coughs and gives him the same sort of disapproving look.

Last night we were watching Fraggles and Moki was running off saying she had to go had to go and leaving a sad crying monster that wanted her to stay. Esme said 'She go to work!' She also said that later when another Fraggle disappeared into a hole and everyone was looking for her. I have had to do a lot of negotiating and explaining again about going to work to her - she wants to come, she wants to see - she wants to help, carry bathtubs and find parts to fix faucets. She is Super Esme, she can help. She doesn't know why she can't, only that Mama is leaving and she can't come with. She says she is a door and I can't pass through. She says she will get in my lunchbox. She gets all ready and then is mad that she can't come with. Every day she comes up with something else. She is such a thinker.