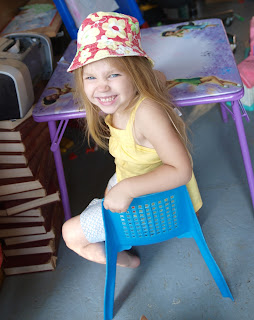 
It is a few days away, but I want to jot a few things down. I might come back and update this after a few days have passed.

Esme has a huge imagination that is coming out all over the place, now. I am 'Spy sheep' and she is 'Spy duck' out in the garden looking for Dog to help him build his POOL (Word World episode) or I am Frog, and I need to wear a hat and go fix the accident (lamp broken in the other episode). She likes to dress up in hats and sunglasses (even ones that are too small) and rollerskates and pretend she is someone else. She tells me she is Super Esme and can fly and that she has a letter S on her chest (while puffing it out at me). She says I am Super Mom and have to come save her because she is tied up like the family in the Incredibles and she needs to get loose and roll like the little girl. She sings songs about 3/4 correct or makes up wild versions of them with lots of emphasis and drawing out the last few words. That makes us laugh. 'The cheeeeeeese staaaaaaands aaaaah-loooooooone.' etc. She does little Looney Tunes things often in her play, and has no idea why we are laughing when she ruffles back imaginary tuxedo tails to sit down and 'play piano' or when she is walking around the room almost daily with her fingers clasped behind her back, bent over and pacing saying 'I thinking... I thinking about... *food/toys/tv/play outside*' and then stops and puts one finger up and says 'I know! I need food/toys/tv/play outside. That will do it!'

I laughed at her yesterday because she was telling me she was thinking about a Christmas and I needed to go find presents for her to see. She talked about Christmas for hours, and sang 'Jingle Bells' while lying on the bed with her feet waving in the air. I am having a hard time thinking about much to do for her birthday or Christmas yet - she is such a generally happy kid who has most everything she could think to want. She would be thrilled with balloons, and a cake with candles! About the only other things I can think of are an everlasting supply of fish sticks, chicken noodle soup and flowers to pick outside ;)

She is still very strong. She has done very well with her PT, only wetting a few times at night and once when we were all doing garden work far from the houses and she didn't know how to ask until it was too late. She gets up and goes to the garden with me nearly every morning, but she is getting less enamored of that. I chastised her several times this week when she brought me the produce container and said I was a 'stupid mama' for leaving it somewhere else. She's halfway right, but sometimes I mean to leave it over there and she follows me around the garden trying to make sure I have it near me out of some personal fastidiousness. She does that a lot. She decides something has to be some way, and then insists upon it. She does not like to be laughed at, or bypassed when she is having a fit. Today at Grandma and Grandpa's house she was being overly serious about playing on the keyboard and told Grandma 'no do not wiggle your foot. I playing.' What a kid!

I came home tonight from work and Mark said that she had been ignoring her food at dinner so he put it in the fridge. She didn't realize that until she wanted it again.. and it was gone. He said she fell down on the floor and curled up and went to sleep because he kept telling her that it was in the fridge because she had not been eating it. Instead of being rational she decided to go to sleep - and was still there when I got home. I convinced her to walk downstairs with me - but the entire time I ate my half of the dinner she laid belly-down on her stool and cried and pouted. I put her food back in the fridge when I was done and she cried and screamed again. I told her it was bathtime, we do not bring food in the bath. She stopped the waterworks immediately, and went to take a bath. Now, a cleaner and less-upset child is eating the food and drinking milk while watching Aladdin.

She has been spending a lot more time on her computer than with her other toys. But, look at the example she has between Mama and Daddy. She plays Starfall and several flash games and is beginning to understand several words by sight and spell a few words with her word processor from memory. She can now arrange letters of a word she knows on the fridge or with her letter tiles and mostly get them in the right order. We gape at her sometimes when she does the math problems on the games by memory and we KNOW she doesn't know how to multiply - she just has memorized which ones go where even when they are mixed up - and is trying to get everything 'in the right place' so she can see the dog dance. She loves to draw in Paint as well, and is starting to draw things like smiley faces and 'letters' 'thats a C' etc... and be happy about it.

She is also learning the finer points of what is corn, beans and pumpkinn seeds - she still wants to call them all beans. Corn beans and pumpkin beans and bean beans... I'm talking to her about how the seeds are babies which grow in the ground to be the mama and daddy plants, and how bees drink the liquid out of the flowers and then the flowers become the beans which Mama eats, they are Mama food. We have discussed this several times out in the garden as she watches bees drink and helps me pick things. Sometimes I explain to her as I sort seeds in the house at the table and she helps me put things in containers and/or sort out colors. She has a great time with those special things. She has a lot of patience for moving around 'little things', - a similar project she had fun with was putting small beads onto a dowel she was holding until all the beads were used up, then turning it upside down and putting them back into a jar. She gets that kind of patience from me, I am certain.
Posted by RheLynn at 7:44 PM