I have to clean my machine and get it ready tomorrow. I worked on a skirt for myself tonight and it was acting up again but the bobbin was nearly empty which is usual for it to act up during. Skirt link to try a second one after this first one tonight. This skirt is a usable garment but I was unable to finish the hem tonight and it could have been done a lot better with the gathers if the machine was working right. My waist measurement is 5 inches more than it was before I had Esme. Yeep! And I thought I was doing good getting back to nearly the same pants size as before she was born.

I have Esme's green cotton dress cut out but did not get into it because she was begging for a bathtub.

NOTES: When Esme says 'Alice' she sounds like she is saying 'A Swiss'. It is very funny and sometimes I still don't catch what she meant and she has to go into further detail with that little scowling eyebrows look she has. She wants to see her every day now - even over Pinocchio. I stepped that up a bit myself by finding her large-format Alice picture book in the things I had put away the other day and wordlessly putting it in her bed for her to find later. She kept looking twice at her bed and not wanting to go check it out because she didn't want to be seen in her bed. But finally curiosity got the better of her and she paged through the entire thing staring at the pictures from the movie in wonder and trying to figure out what part it was. I read parts of it to her again last night before bed and she was very happy with that.

I'm trying to get her one of these books, a smaller Golden book, as well. I have a soft spot for Golden books because of the collection my siblings passed on to me. There are several I have picked up at antique stores near us and/or the library that are too delicate to let Esme look through herself but I do read to her once in a while. I think she would enjoy some specific ones we don't have, but I won't spend very much for one (not that soft of a spot!). I saw a book I liked from my childhood 'The Color Kittens' by Margaret Wise Brown (same author as the Little Bear books I used to read to her often) the other day about kittens who are mixing paint colors in paint cans, but the seller wanted over five dollars for it shipped which was too much for a vintage child's picture book when she isn't so careful with them yet and it is more likely to be delicate. It looks like that book was reprinted in 2003 with similar, but not so cute illustrations :( The original copy was the one I remember so dearly and apparently, so many others as well - because they are the ones being charged more for. 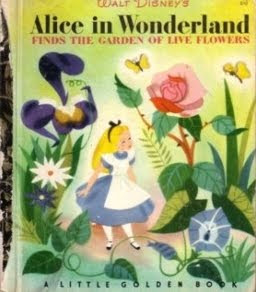 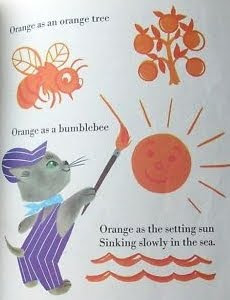 We also have just pulled out our Golden books, and have started reading to Emily the ones that are in good shape. I love doing stuff with her that I remember!