Day out with Grandma

Esme was all over the board today out with Grandma and me in town. She sang, she laughed, she cried, she screamed, she drug her feet, she was happy - then she was crying etc etc... *sigh* Mumum was exasperated, a little - especially when I could not reverse the car on a downward incline the first five times I tried it *felt very dumb - but somehow got it worked out*.

Esme really likes to stick to the same routine - it makes her comfortable. She likes to tell me what she thinks is coming up next but also gets upset when the expected doesn't happen. She can meltdown into an unreasonable lump of screaming child if she thinks she messed up the routine... brought the wrong shoes, expected to go in one door and we went in another etc.. It is not always that those meltdowns happen (less now than a year ago) but they still happen. Today was entirely off 'normal' routine - going to the store without Daddy was a big one. I even felt myself that there were some bits of the routine that were really hard to do by myself without Mark to pass Esme to -- like getting the groceries in the car on the driver's side and Esme in the car on the passenger side without leaving her alone etc... Esme loved having Grandma with us, but was upset when she couldn't see her.... was not willing to listen to Grandma, or to me once she was already upset etc.. When she was struggling and being difficult in a small and cramped store she would not listen to my reasons for needing to hold her -- she kept saying "see Grandma, Esme see Grandma, talk to Grandma!' but then she wanted Grandma to carry her. She is too heavy for Grandma to carry her very far. She is almost too heavy for ME to carry very far. And she was doing a lot of dragging her feet because she didn't want to walk, and yelling at me because she didn't want me to carry her either.

She needs a lot more practice in public with new routines.. she just doesn't get a lot of it. She is usually an angel when Mumum and Daddy are doing the same thing we always do (Store, bank, co-op, mumum's work, french fry etc)... Daddy said I should have bought her a french fry. He had taken her out with Grandpa yesterday and she was about to throw a full out fit then but it was fixed by french fries... Really I should have brought a lollipop in my purse. That might have at least occupied parts of her when I would expect it to be difficult for her to behave. ie: give it to her BEFORE we go in the place, while she is still being good - and then let her open it and maybe she would act nicer or have the threat of losing it etc...

The biggest point is she was cranky almost since the moment we woke up this morning. She has been contrary and demanding. That's a bad mix - because she demands something, then doesn't want it, then is mad if I take it away - and on and on and on.... It adds up to what is really a good day to try much 'new' anyway! Or maybe it is the best day - as her attitude is constantly off-key and there is no pleasing her for long anyway...? But we got it all done - the stores and filling gas cans and groceries and Daddy got all the work he wanted to get done here at home on the tractor.

I bought a very small amount of fabric at the fabric store - just enough to line two shirts and to add on to a remnant I already have but was upset about it not being enough to make a shirt out of. I've gotten the items I wanted to get done and packaged up... now to finish the laundry and get to bed early for our meeting tomorrow.

I'm wondering if I should use the red fabric I bought more of today could make the face lining and cuffs of another one of these: 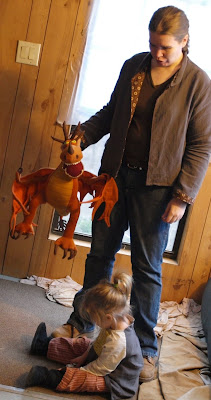 I've been wearing that jacket a lot around the house and to bed etc... it keeps my shoulders nice and warm when the blanket slips away in the middle of the night etc. I have a thinner gray fabric that might convince me enough to do it... but maybe not. My 'that's selfish' gene kicks in there because I originally intended to make Esme another dress out of it (she likes her red one a lot)... and then she told me NO RED PRETTY during her contrariness today and I'm rethinking it. It has the same kind of 'eyestar' pattern as the brown fabric I used then.

LATER: Esme is out of the bathtub, eating her fish sticks and getting ready for bed. She is being quite a bit better since the bath - even though I washed her hair and put the other conditioner in it (needs to be rinsed out at the end of the bath - which she HATES). She has done nearly everything I've asked since coming out of the bathtub... hopefully when she is done eating she will come get in her bed and read a book with me so we can all go to sleep. We have an early meeting tomorrow. Mark says I'm stressing too much about it... but that is normal for me.
Posted by RheLynn at 3:29 PM