of forks and Shaun the Sheep

Esme just got done eating some ravioli with her little salad fork. I'm watching her closely but letting her have the metal forks more and more. The plastic ones don't pierce skin or her food... and she gets frustrated with them and starts using it as a spoon. She has the metal forks figured out. A while back (I can't find it now) we saw 'awful X-Rays' on Fark.com where one showed a toddler boy who had fell on a fork at a family picnic and it went into him just below the eyebrow and above the eye -- he survived and kept his sight but SCARY. How many of us, however, learned to eat with utensils and didn't have such an incident? Most of us. *go knock on some real wood somewhere*

Now, after a good amount of ravioli and apple juice, Esme is watching Shaun the Sheep again. We'll more than likely get sick of it sometimes this century - but it is her favorite. She can even ask for it by name. She asked for Starfall today, too - first by asking 'E, O?' to Daddy on his computer and then when I asked 'Starfall?' she nodded and climbed in my lap trying to say TA TA. Even though her words aren't complete she is trying to say so much more and it's communicative - we understand her etc...

I have all but the waistband, skirt and buttons done on the second pinnie dress. Going to go make some more coffee and decide what I want to do with it. This is the part I both have to decide what fabric to use for the skirt and also decide how I want to alter it so the armholes turn out better. Have to work tomorrow but then four days paid vacation off! Yay! 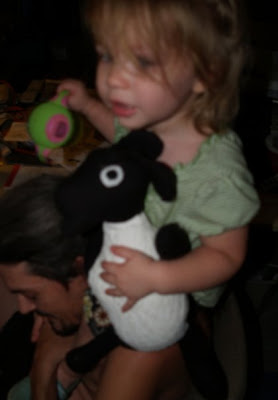 blurry pic - but this is the Shaun the Sheep style sheep toy I made Esme. She likes it and says it's a real sheep, compared to white-faced sheep that she looks at with confusion and says baaa? uh uh!
Posted by RheLynn at 11:12 AM