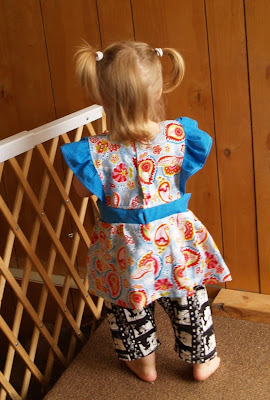 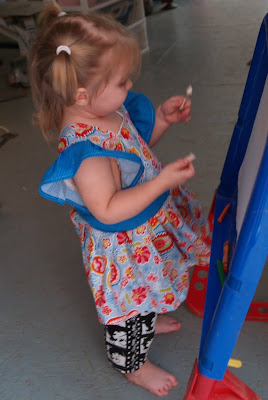 First attempt at the pinafore dress. It's a bit brightly colored ;) I was afraid the size 2 pattern would be too small - but actually looks like there is room for growing into it. Made with this thrift store pattern.

I measured and weighed Esme again today - mostly because she had smacked the scale against something and it was broken for a long time. She smacked it again today and I noticed it was working again (weird how that happens). She weighs 28 lbs and measures somewhere between 32 and 33 (wiggly!) inches tall. The height charts say she's shorter than average... but I think she's just wiggly. Everyone who sees her thinks she's so tall and older than she really is.
Posted by RheLynn at 4:38 PM

Such a cute dress! She looks exactly like Piper from the back. :)