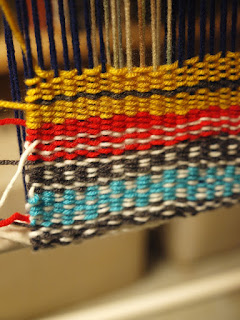 Working on this... it will be a month or so before I get to the done stage.  I tried heddle sticks but they failed... oh well, try again next time.  I wrapped the yarn the wrong way a few times so the heddles will not work as well as they should.

PVC Pipe Loom by Simplified Building
I made a loom somewhat like the one at the link above - but not entirely.
I had most of the pieces for mine on hand and kind of fudged the rest.

The finished area n my loom is about 2 foot by 4 foot.

The other thing is I don't have anywhere to put it as a rug - our dogs would eat a rug like this in minutes.  But, I could probably make a cushion or a bag out of the finished work and make it useful.
And it is kind of an experimental zen project anyway - I like to weave.

Other things:  I finished the Maze Runner series/  The last bit felt like Chicken Run.  I know they aren't really the same.  But, now that the thought entered my brain it is hard to get it out.  I've started on the Sixty Eight Rooms trilogy.

Esme has Martin Luther King Jr. day off tomorrow.  I need to work so early my eyes won't be functioning.  And it is very cold out.  We have a new manager (again) at work.  It is something like every six months to a year they change things for some reason or another.  Could be bad but it isn't - the guy knows the department and has been there before.  It is just the change change change thing that grinds me a little and makes me mention it.