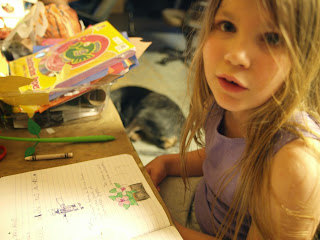 Her sentence today was 'There were no aliens.' 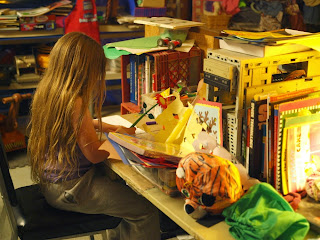 The better organized writing area and her favorite pen we bought at a store earlier this year.

We started working on a story called the Adventure of the Twelve Charms.  I am writing it out for her and she is telling the story. Then we will go back (hopefully) and smooth it out some.  She started telling me this long 'dream' about elves and vampires and portals and a mission from the king.  Daddy said 'write it down - make it into a book!'.

So, we'll try and see where it goes!

There were lots of other Esme-isms today... the Force was running strong in this one.

'This toast is firm.  That means solid.  I saw it in a cartoon I was watching.  I forget which one.'
'The Ancient Egyptians didn't have hairbrushes.  So, why do I have to brush my hair?' - told her they did, beautiful ones actually,.. she hadn't seen it in the artifacts book we looked through...I told her to brush her hair and I would look some up for her to see.  She did, and we saw several beautiful bone combs and others.  I told her we might have to look up the Senet game, as there was a beautiful set shown in one of the pictures.  We saw African and Native American combs and brushes in the pages, too - she was impressed.
I told her that the story was just a first draft.  No, not a giraffe, a draft.  Err.. nevermind (as Daddy starts to joke about the second and fourth giraffe) -- we will go more over that after we get it written down.  It means we might have to change some things as we go.
You mean I have to clean up  this whole room tomorrow, like,everything, all gone?  Is that what you want me to do? //No, and you know it.. pick up some things and get them off the floor // so, on the ceiling then? *It's bedtime (Now she has the octopus toy on her head and is pretending to be a sleeping octopus..but removes it before I can kiss IT goodnight..as she wants the kiss goodnight.)

//and tomorrow is another day!
Posted by RheLynn at 7:56 PM