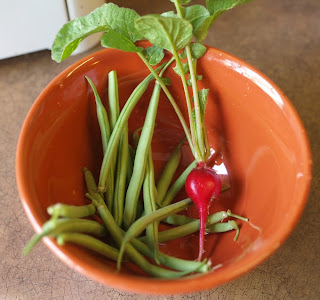 A small harvest gained in the garden early this morning. There were about eight other radishes yesterday, which are not quite as pretty now chopped in water in the fridge. And the green beans have begun to produce! The pinto beans have begun, as well - but they are quite a bit smaller, flatter and probably will do much better matured on the bush and collected dry. I kept reseeding the green beans, about 50% of them originally had poor germination or were killed off by wind, rain, and in one case an attack from little girl feet. I'll probably be overwhelmed later on by them, but at the moment I'm happy that I reseeded them! 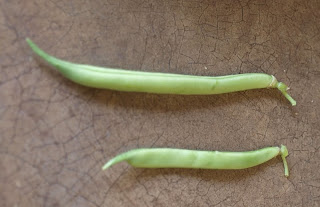 On top is a standard 'green bean' of the variety 'Provider'

On bottom is a green pinto bean, which can be eaten green

but will mature as small speckled dry beans

Our summer squash also has tiny one inch fruits beginning! The zucchini is surprising me by not even having flowered yet. The pumpkins and peppers and tomatoes are all flowering and getting ready to produce. I think there are tiny button size peppers on the pimento bush! The lima beans are starting to flower just now, quite a bit later than the other two beans, but they also had to be reseeded once for poor germination. The corn and cucumbers have grown inches overnight but are far from their time.

My sinus infection is still horrid - but I'm working anyway as the only real effects are a hoarse voice and general uncomfortableness and drowsiness. Unless I sneeze more or it takes hold in my chest I'll be over with it by my vacation. I'm really hoping so!
Posted by RheLynn at 6:29 AM