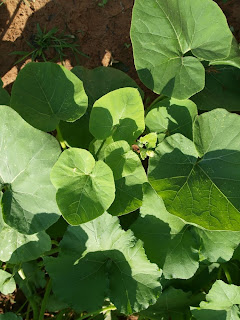 a pretty formation of squash leaves 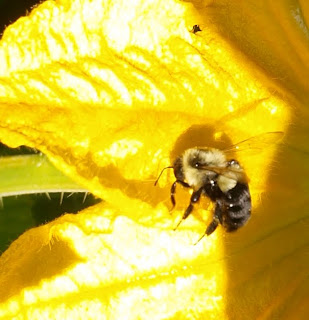 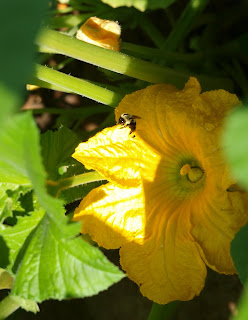 The same happy bee, busy at his work

I've been out in the garden again for the morning. There is a massive hum out there, while the bees take their fill of the pollen in the squash flowers. I cut out two vines from the Connecticut Field pumpkins and threw them in the woods -- they were starting to wander where they were not wanted... the bees didn't like that much but didn't complain too heavily about it, either. Now it is just about 10 am and too hot to really be out there. Esme is playing in a mud puddle in the shade.. so I am letting her. If she was running around in the sun I would try to find another way to entertain her.

I planted the long radishes and the English daisy seeds. I put two black-eyed pea seeds (standard grocery store dry goods, I didn't buy them as seed) at the base of each of the row marker poles in the corn... if they grow it will be nice. If they do not grow, the rest still served their purpose as lunch. Also there was a poisonous hyacinth bean plant that a friend at work gave me... and I'm a little scared of. It gives large purple half-moon beans that can only be eaten when they are very small... and after that are poisonous. I put it in the corner of the fenced-in garden on it's own stake.

We have marigolds all over the garden, scattered at will from very cheap seed packets from our country store (15-20 cents each). When they bloom it will be gorgeous out there. The blooms on the beans and squash are very pretty in their own right. I caught some pictures of the bees inside the flowers. 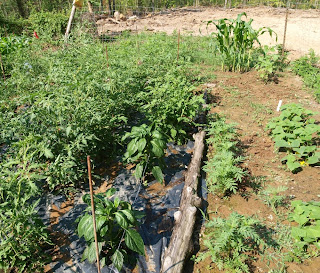 Above is the portion of the garden that is NOT squash, corn, or beans. Tomatoes, peppers, a few flowers, marigolds, cucumbers, sunflowers and well.. okay there is some ornamental corn, gourds and (not sprouted) scarlet runner beans in the very back. So, yes there is some corn squash and beans here *ha*. 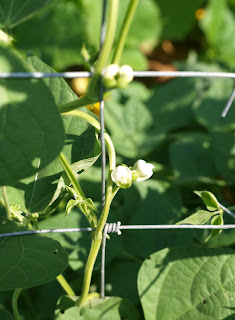 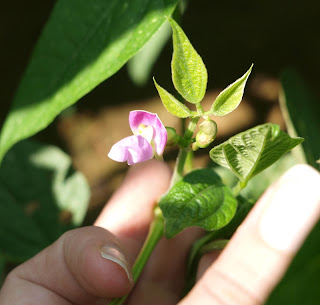 Now I am off to get my simmering black eyed peas (with green beans and radishes) off the stove and see what can be done with the mixture. Esme is still running around outside. If she is good and gets cleaned up maybe I'll take her to the library?

Estimation: According to the online calendar, the black eyed peas would be maturing in the first week of August and/or up until the last week of September. (70-110 days from June 6, 2011) Because they are from the grocery and not an actual seed source, they may not flower and produce at all. I am guessing (because it does not say anywhere) the Shackamaxon pole beans are also about 100 days to drying time... which means I need to plant them soon instead of waiting until July.

April 14th was when we planted the pintos, green beans and Connecticut Field pumpkins (110 days). They should also come due sometime in mid-August. The turk's turbans (95d) and blue jarrahdale pumpkins (100d) were planted one and two weeks after the Connecticut Field pumpkins, respectively, and The very first green beans were on the 2nd of June. The first zucchini (2 inches long) was on the 4th of June. The carrots are not quite ready today.