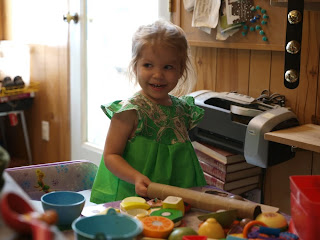 This is the new green top, now finished. I hope the front relaxes some after a few washings, it kind of sticks up some - that could be the fabric choice and it could be the newness of the fabric. She does like it, and besides that one little bit the dress fits very well. If I had had enough of the print green it would have been perfect - that fabric is soft and drapey.

We've been having a lot of playing and a lot more 'Bossy Cow' attitude today. She wants to pick everything at the store - have her TV do exactly what she wants when she wants it to (my tv, no mine mine!). And, she really really wants to go see Grandma - but I told her Grandma wasn't there when we called, and she was too cranky after that to call again. I think she really needs a NAP. Maybe she can see Grandma tonight, maybe tomorrow. All we have to do tomorrow is post office.

The baby cat has been an angel put in the box for most of the day. Esme has also been in the box. She's been playing with blocks and putting her toys through the tube again and feeding them with toy spoons. She did her shape worksheet one more time today - I put it out and didn't ask her to do it, but she saw it on the bed and went and did it anyway :) We watched another piglet video on youtube and then I put on Babe, the movie while she had her applesauce, bread and milk. She got bored with it about halfway through, but picked up on it again at the end. I'm thinking to get the picture encyclopedias out for her homeschool tonight, and draw some on paper with her - she is very much into pretend today. She is putting her blocks out as a 'road' across the room and having her playmobils jump jump across them and into the box at the end. 'jump dolly - jump! jump back dolly!' She's also having a lot of fun with a funnel, a piece of fine chain, the paper towel tube and a large box. 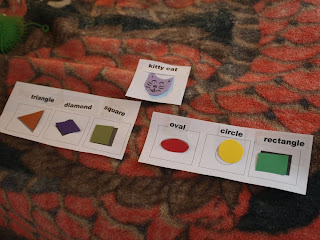 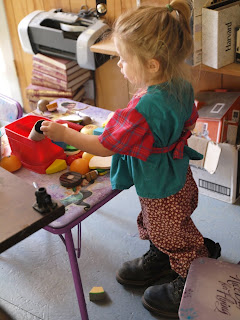 wearing Daddy's boots and playing with the paper towel tube