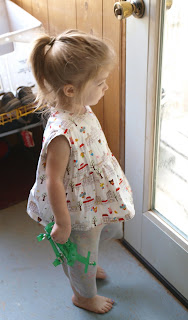 Asking to go outside and play with her 'green rebot'

September 23rd is the equinox this year, according to Wikipedia, and then the days will begin to be shorter than the nights and winter will be quickly arriving. When your birthday falls on the solstice you might be a little more interested in such terms. I was, when I was a kid.

This is the 'science experiment' shirt out of Japanese animal town fabric. It is the tieback pattern (without tiebacks) and with the bodice lining idea from the pink dress to line the entire top without sleeves. I also tried to gather the front instead of pleat it... worked half as well as I wanted it to. There would need to be just a bit more fabric in the front to gather it evenly instead of pleat it at the sides which I normally do. 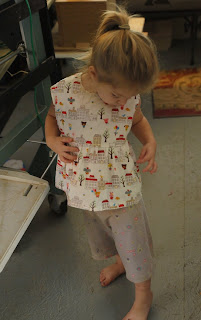 I've been holding this fabric in reserve for about a year... guilty about buying it on Etsy at some 7.00 a yard and wanting to use it well. Esme saw it in a bag this week and said 'elephant with an apple on it's head!' That is one of the animal pictures on it. I asked her to find that one when I was taking pictures and she did point to one of them. 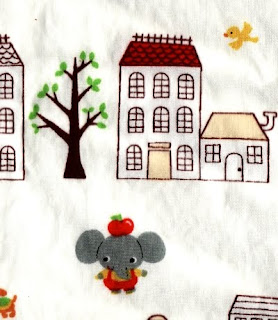 close-up of the elephant and apple

I think you used it well!!