Horse draws with the marker

It's been slow since we went to the fair - I've had some long slow days at work and Esme has been asleep twice when I came home from work. We've been 'tagteaming' her a bit changing her in the middle of the night to ensure less wet bedsheets in the morning. We've all reaped some benefit by getting a longer sleep for her in the morning. Last night she was rollerskating in the kitchen and I really wished I could have gotten a few photos - but she didn't want me to leave and it wasn't that important. She is getting really good for having them on only once in a while. She has impressed us by bending down and picking things up off the floor without falling over and gliding along at speed by pulling on the table. Most of her 'skating' is just moving one foot in front of the other across the floor slowly with a giant 'I can DO this' grin on her face. She has fallen over some and we've worked to teach her to get to something she can pull on or try to right her feet by herself. If she can't right herself I'll go and help if she is far away, or have her edge over to me if I am right there and give her a hand to pull on.

I did get some photos tonight of a little fun.
These are some shots of Esme 'giving' her toy horse a marker to 'draw with.'
Melita (a friend on FB with a little boy six months older than Esme) noted she is drawing with her left hand. She is kind of ambidextrous, like I am. That makes the pictures here with the 'handing over' from right to left even cooler ;) 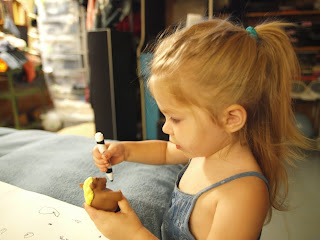 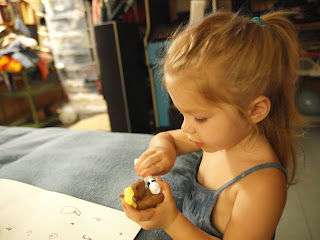 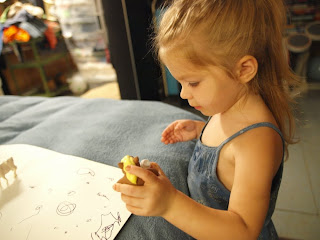 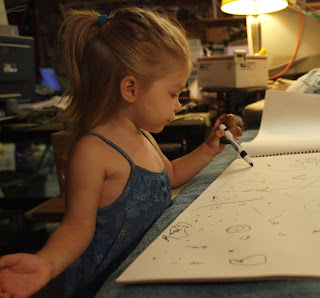 Then the horse 'draws' on the paper.
It was drawing 'grass' and 'bugs' for a cow toy she had given me. The cow 'ate' the drawn grass and 'bugs' which were lines and dots. The spirals are attempts at flowers and snails. I drew her some flowers and a puppy with a drink cup as well. 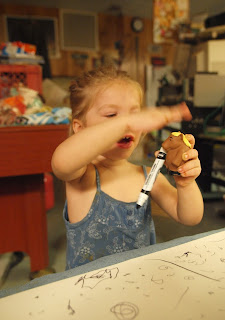 Then she pats it on the head and says 'good boy horse you DRAW, it pretty!'

Esme ate an ENTIRE can of ravioli to herself today - Mark winced in pain at the thought of it. And she begged me for more when I got home! We were having a lot of fun building with blocks as well, and a lot of simple fun :) Esme even got Daddy to participate. 'Daddy TRY!' So Daddy would try to put a block on top of a very wavering tower. Then, 'Mumum TRY. Esme TRY. I did it! I did it!' and 'It fall down.' and she would try to hide behind this tiny tower of blocks and jump out and say 'boo!'. 'I hide! I hide! BOO Daddy! Boo Mumum!' etc... She's eating applesauce and drinking juice now. She wanted more ravioli but I told her if she had ravioli again she would need to go to BED right afterwards but if we saved the ravioli for another day she have applesauce and could watch another show before going to bed.

A few other pictures: 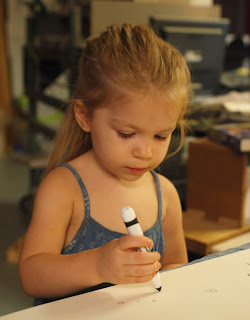 concentrating while drawing with the right hand (before the horse decided to draw). 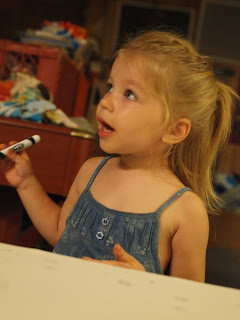 saying 'aaaaahhhhh they fall down!' at the screen when two cartoon characters fell off a cliff.