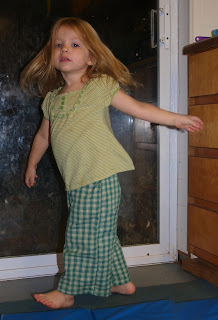 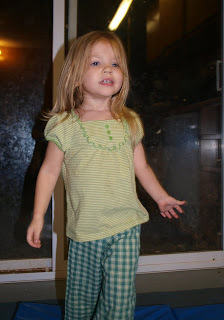 'I fly, Esme fly!'
I liked those pictures and Esme pointed to them on the screen and said 'Esme fly!' Well, right you are little one... you do fly :) She is using her name so much more often now. I did it! Esme did it! etc... and calling herself by name in the mirror and in pictures even though sometimes it feels like she still thinks that is 'another person' and not herself.... she has most of that down now.

I made her several pairs of pants the past few days - because she needed them. I cut them out at work and sewed them after I got home. They are size 3 with about two inches added to the bottom length. The medium-weight elastic is 15.5 inches, although her waist is 20.5 inches. I'm writing that down because I keep forgetting it and keep having to check again and again! She liked this pair quite a bit although Daddy says it looks like 'Florida old man golfer' fabric. I also asked her to show me her headstand she is working on. And she did. She had us all doing headstands in the kitchen earlier! 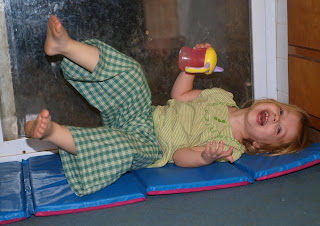 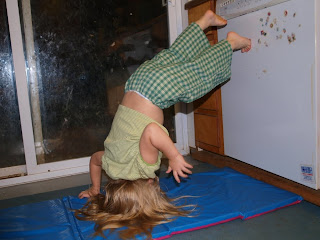 I got the full five act version of how to cook a fish stick also - for her playmobil daddy doll she had downstairs. Esme told the daddy doll to sit on the chair while she pretended to take fish sticks out of the freezer, put them on a pan, put them in the oven, beep beep beep to mean they are done, and then take them out and give to the daddy doll, and put the empty dish in the oven and the plate after eating in the sink. All of this without actually opening the fridge or the oven - but making herself very clear. And she wasn't hungry - the daddy doll was, because the daddy doll said 'RAR' at her (me actually). She has so much more to say lately, Mark says, and is working ever harder on communicating it. She had a discussion with me tonight about 'need baby wipe wash hand draw blue EW!' That was her way of trying to say 'I've got blue marker on my hand please help me find something to wash it off with.'

And for comic relief, as if we need more... she is now spinning around near me with a box on her head saying 'I'm in box it dark got a box (on my) face HI! I hide. Peekaboo! I hide. yea, box on HEAD.' Daddy made her a balloon hat which she puts on her head and says 'I did it - I'm a funny baby!' She also called Jeff Foxworthy a 'bad funny man' tonight when he did the bit where he falls down on the floor and rolls around while everyone laughs at him. In her mind the actor is bad for rolling around on the floor like that -- but funny as well. She took turns calling the other comics on Mark's show bad and funny...she has really gotten into adjectives lately and also into saying whole phrases like 'what's happening', 'what are you doing', 'how are you' and one sentence 'o* sh*t', that we don't want her to say! But she does use that last one in proper context... when someone is falling, or people are shooting at each other in a movie etc... something bad is happening, watch out!

The headstand is AWESOME!!