Our little girl is on a roll...

I think she is definitely back 'in fine form' again.  I said that last week - hopefully I am right this time!  She was playing Sims 2 on my computer while I was knitting.  She had set up 'a party' which included selling half the house's furniture to have money to buy balloons, chairs and food banquets outside and then she started digging holes and building 'hills' as she calls them, spikes that reached all the way to the sky positioned all around the chairs forming a wall of 'teeth'.  She got clicked off of the icon she wanted and wanted help from Daddy.  He helped her, and then she needed something else - so I get over there to see this very odd scene while she is saying she needs me to change the viewpoint 'How do I get down there Mama'- because she wanted the 45 degree viewpoint (first one) on and I had the overhead viewpoint I prefer (second one) on when I finished helping her.  The clincher is why she describes needing to 'use the shovel dig a hole'...  She said she had to invite everyone over to the party but the water-filled holes and walls were to keep the monsters out or to have the monsters fall in the holes so they don't eat the people.  ??  Oh my.  She does have her 'own ideas' about what games are really all about.  This one is about throwing parties with balloons, having lots of chairs, avoiding monsters and going dancing! 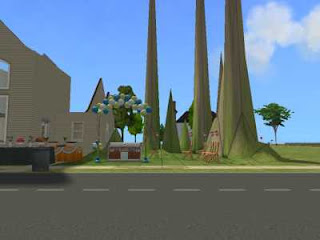 \
the strange Sims2 scene she was making...
you can't see them very well but the rest of the house is surrounded by bits
of 'moat' - large holes dug and filled with water. 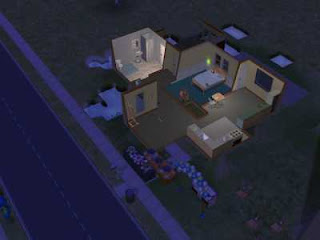 It was also interesting to see her 'snapshots' she had made while she was playing.  At times, she was taking twelve pictures per minute of game time all of the 'thoughts' the people were thinking about while they were sleeping, or reading a book etc etc... I am going to have a lot of files to delete if she plays quite a bit more on my computer!  Also, daddy's 'people game' has fighting. (skyrim)  Mama's people game has people but they are no fighting.  She told me that today...

Her language is improving quite a bit.  We are hearing things much closer to full sentences from her.  We still sometimes have to say 'HUH?' but mostly it is because she is rattling things off so quickly.  When she was on my computer and wanted the headphones on - had them almost in the jack and on her head before I knew what she wanted - but then she said 'they no work for me *sigh*'.  I turned the volume up and she was so happy - couldn't adjust them to her size and she was upset about that...but later a song was on 'something a noise to me, I no like it.'  'annoying' is a word she is still working out, but she understands the concept.

She was watching a bit on a 'grownup' movie in between drink cups and bathroom breaks from being outside and made a on-the-nose comment about the plotline because she has seen a parody of it before on the Simpsons.  Mark and I looked at each other and weren't quite sure if we heard what we thought we did - 'That man try GRRRR and it so heavy. (the bathtub).  The big n'dan man, he do it.'  That is what we thought we heard - but the jury is still out, she wouldn't repeat it and went running back outside.  At the store she wanted 'blue shoes to go sleep in' - fuzzy blue slip-on slippers in the women's section.  She must have seen that in a book or on computer.   We looked, but found nothing in her size in the kids section.  She did pick out a pair of Hello Kitty clogs like her purple croc shoes that we agreed on - there is coming a day soon the purple shoes are going to fall apart!

And there were 'tigers' in our garden according to her - when I was thinning corn.  She wanted to 'come into the grass plants (corn) with you' to get away from them.  Mama wouldn't play that game - because I didn't want her to knock the corn over.  She carried a very embarrassed orange housecat (our PeanutNinja cat) out of the garden in an undignified fashion and told the 'tiger' to stay out.  She was trying to read things on my screen and was very excited about the possibility of getting a box of books she had seen me looking at in an auction.  I told her they would come to our mailbox and she said she didn't want a nail box, no nails, don't need nails.  MAIL box - oh wait, that is a different story - yes books in mailbox, she wants that!
Posted by RheLynn at 8:36 PM