Esme got sick last night - mostly because she was crying with a stuffy nose and a full stomach. She is still coughing some this morning because she hurt her throat and her nose is still stuffed up. It is cold outside, so we probably will not play outside as much as I thought we might. She played outside a lot with Daddy yesterday - and ran the puppy into the ground again. When I got home from work Loula was lying on the floor on a blanket saying she was TIRED. And Esme was still going sixty-per at that point.

On preschool the other day - Esme said that the kids were mad at her, they hit her, and the lady (teacher) said STOP. She said they were not friends - but we convinced her they might be friends. Daddy really laughed over his milkshake when she said that holding two hands out as if weighing options 'Kids are not friends. But, they might be friends?' She was swinging her arms at us and pushing us, which is something she has not done in years. Her mood improved after we got milkshakes - she was turning 'back' into our Esme at that point, but she thought about the difference between kids and adults all day. I could see it in her eyes as she thought about things. She said she DID want to go back to school, although I haven't told her when. We will see what happens when next week arrives. I can help drop her off and have a short word with the teacher about it. 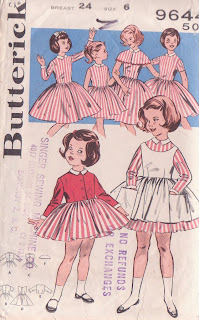 This is the 'basic bonus dress' pattern. I still scan the patterns on E often - but don't feel inclined to add much more to my collection. This one was basic, yet had variations, and I had never seen it before. I snapped it up, and found that it was quite rare. I am hoping to make one up for Esme soon. I really need to make some pants - she has ripped another pair, which makes us down three.

I have the weekend off - which is starting out to be lazy. I'll see if I get any ambition later.
Posted by RheLynn at 7:41 AM