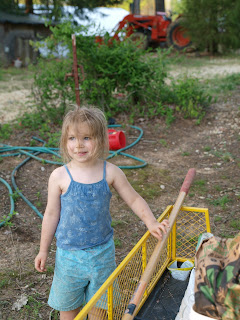 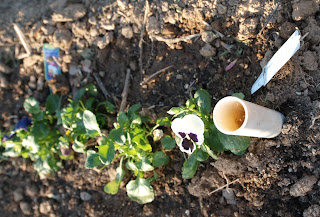 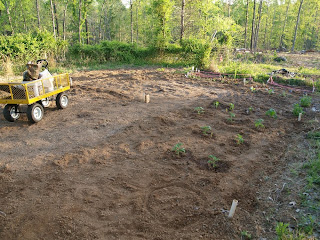 We have returned from a jaunt to the co-op bearing mint, tomatoes, peppers and more... The garden was tilled the other day and we will be making more soil additions and tilling again today. Then it is off and running! I just planted some cosmos and snapdragons from seed... zinnias and others to come as well. There is a small section we have already cordoned off for flowers and herbs. There are 'volunteer' gladiolus I saw when I was tilling and that was the start of that.

The co-op had many more varieties this year, including of field peas (cowpeas). I picked up a bag of Speckled butterpeas but am also anxious to decide which ones out of my large stash of different heirloom beans would be best situated for this year, and where. We have corn, carrots and a lot of other vegetable seeds. I am trying just a small stint of okra this year as well - it has overwhelmed me in the past but the flowers are pretty enough to plant it as an ornamental. Then there are zucchini, scallop squash and pumpkins as well. 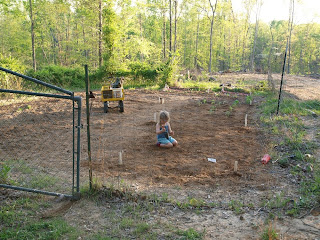 Esme put herself between these four posts and told me she was in a castle, and waiting to find 'Her Majesty' to bring the people and the flags to. Funny girl.

I've decided to plant the Maria Amazalitei pole beans, the Jeminez, parchman lockwood pintos, bosnian pole, florida speckled lima beans, dixie butterpea lima beans, ingot yellow summer squash, cocozelle zucchini, black beauty zucchini and waltham butternut squash. I have several breeds of pumpkin over in the freezer seeds but I have not went through them yet. I think the one that I had planned to use was Small Sugar Pie. Some of these seeds will be put here in this garden and some in the 'west field' as we have begun calling it to determine it away from the hilltop garden near Grandma's house.
Posted by RheLynn at 11:43 AM

Esme looks so grown up in that first picture!