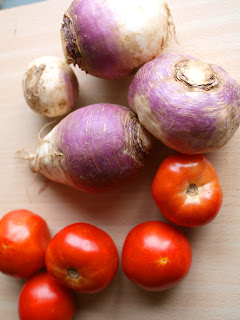 We bought these at the West Tennessee Farmer's Market stall at the Huntingdon, TN flea market. It is held every Tuedsday morning, weather permitting. The turnips and tomatoes both looked very good. We bought strawberries, as well - but they are already cut up and being eaten! I thought I was crazy for buying turnips - but they looked so good. Then I found that Grandma had already bought turnips as well!

The flea market this morning had ducks and chickens, rabbits and dogs - people were selling all manner of things. We had come to look for plants, as well - but the selection was not good enough to make us buy. Part of that is we have not tilled yet and are expecting a cold spell next week. However, it was starting to get 'hot' already and a lot of people were leaving by 9 am. Esme really liked the ducklings, and a german shepherd puppy that was sitting with it's mother and talking about the world. Watching Esme talk to them was very interesting!

I found some baskets, a sweater, some peppermint soap... Esme saw the pile of clothes strewn out on a sheet and asked me where all the people were, these were just clothes, where were the people? I wouldn't have thought about it that way - but she has an interesting point of view on the world from three and a half feet up ;) Then we were drawn to the produce stands. I saw a Morse sewing machine there but could not convince myself it was useable. We both noted there weren't as many books as there used to be - and that the prices seemed to have gone up on everything. Mark got his knife sharpened - as the sharpener there does a very good job.

//we've been out to town one more time and bought some flowering plant roots at the tractor supply. We have been planting the hydrangeas and hummingbird vines, settling into hoping for a beautiful summer ahead. Mark is trying to convince me to go out and drive the tractor over our new garden place. I have black eyed peas simmering on the stove and fabric drying downstairs for new pants for Esme again. She has torn another pair and another dress skirt again...
Posted by RheLynn at 8:42 AM