pictures of a Friday off with toy fish

We went to town today and Esme got to use her piggybank quarters to buy a toy. She looked at every toy in the store and I told her how much she had to spend in the little purse she was carrying. She picked this fishing toy, which is the non-magnetic one. It was very frustrating for her at first (the one at school is magnetic I have to think..from what she tells me) but she found out the trick and has been happy with it for hours. 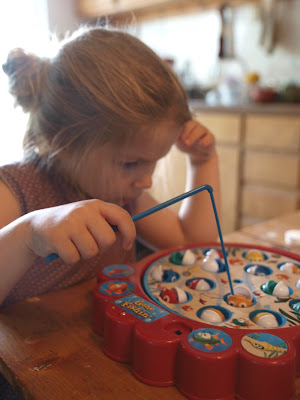 concentration
and she missed a lot for several minutes... 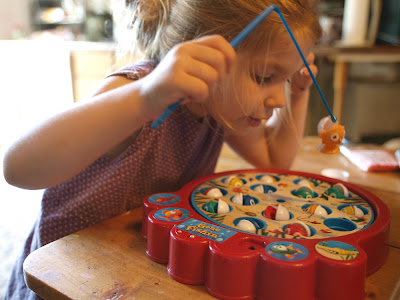 then she gets one 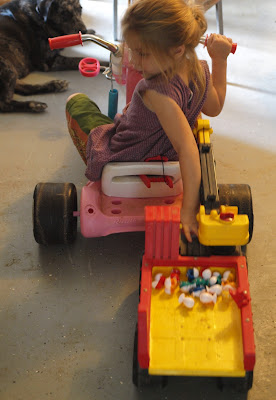 Mark asked me if she figured out the 'trailer hitch' by herself. Yes - but I can't remember how long ago. She 'hooks' it up to both her big wheel bike and a little push car in the downstairs and drags all sorts of toys around in the bed of the Tonka truck. I had ceased to think it was anything but normal, but yes, it is a pretty good trick. 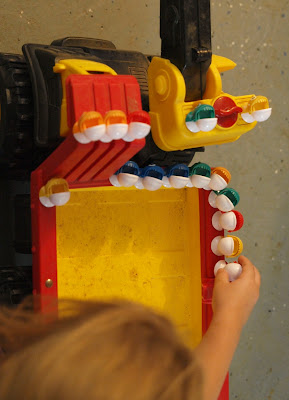 It's moments like these that I truly think she intends to rule the world one day. I tell her to not leave them there because they will get eaten by a dog. She says, no - dogs don't eat them. But cats will. Cats (chomp) fish. Then she gets out of the 'vehicle' and lines them all up on the edge of the truck bed. Are they having a meeting? No, they are going to fight the cats. They are ready. 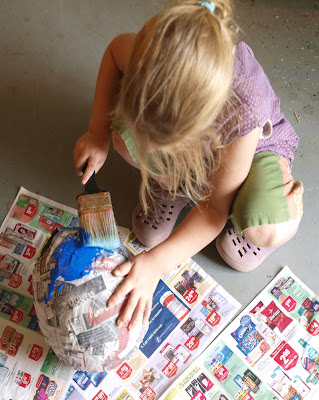 We are also making a solar system out of paper mache.. or at least starting with the Earth. Esme says it looks like an egg. It will take a lot of work until it looks like anything but a strange caterpillar cocoon.

Recipe:
1 cup of flour
2 cups of water
mix that up really well with fingers and get as many of the lumps out as possible.
Add a few good squeezes (probably about 1/3 cup?) Elmers Glue
mix it up really well.
Use only 'rough' newsprint, nothing shiny. The black and white works the best but color ink won't ruin it, just maybe be a bit harder to get soaked through.

Use a blown up regular balloon as a model for round things, plastic boxes work well as molds if you can get the finished product back off the bottom easily.

Cut 1 inch strips out of the newsprint, and spread some of the mixture on top of the blown up balloon (under the paper) as you lay it strip by strip. Smear more mixture on top of the strip and try to soak it through without tearing the strip. Work around the object and lay some strips crosswise and overlapping to make a mesh - or it will fall apart later. Think structure and strength. Small pieces will not have enough crosswise strength and if there is nothing to hold it vertically and horizontally it will fall apart when the balloon is gone.

Cover the entire balloon slowly from one side to the other - keep working to make the structure stronger. Lay on a shiny piece of newspaper flyer or ad to dry - as it is less likely to stick to the object as it dries. Let dry overnight or 8-10 hours. Carefully pinch some of the balloon tail up and make a hole there - let that area reconverge with the rest of the balloon air and slowly let the air out. If the paper mache is dry, strong and the structure good - the balloon will separate from the outside and deflate, being able to be pulled out. If it is a tupperware or other plastic box you are using, work it back and forth gently when entirely dry to try to separate it from the mold.

Be careful painting your object - remember it is paper, and as it gets wet again the surface loses its structure It would be best to paint small areas at a time and let them dry.

Ideas : planets, eggs, 'lanterns' (no candles or fire), bowls for decoration and holding small things, masks (cut in half), pinatas, lots more I am sure...

Notes : We went to a fast food and Esme tried to place her order but the older lady at the counter could not hear her. Still, she did good with that and happily stood in line, listened and was perfect all the way to the car and home. She ate nearly everything - and ate a big sandwich for dinner later. That is good, she has been having philosophical discussions with me about growing, food and not needing to eat because she is 'big enough' - I know I stress over these too much... but the more she argues the less capable I feel sometimes to argue back effectively and correctly so I don't give her a wrong conclusion - like 'food is for growing' which is one of her current ones. We are trying to modify that, now to 'food is for energy to be strong - including growing.' She was in argument mode again last night - mostly over bedtime, but not listening about a few others things. We were playing downstairs and she was being her usual bossy Napoleon attitude when it comes to playing... I came upstairs to let the dog out and started to fix her dress instead of returning to her. She came up, saw what I was doing and then got into the button box (off limits because she does this repetitive thing with them that annoys me and Dad both) even though I told her my hands were full and to quit... classic - 'I'm not playing in it, I'm being busy.' Then Daddy tripped over the mess she left downstairs. We put her to bed after that although that was a trial, too. Daddy took charge of putting her to bed because I needed to be up way too early for that.. and she was determined to make it a battle.