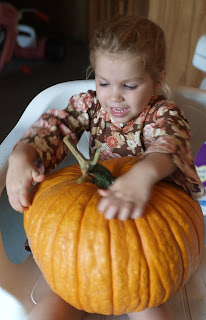 The second pumpkin from the garden

This one is huge! There are also three or four more coming that are much smaller. This one was our 'hiding' pumpkin, all the way over in the middle of the zucchini!

Esme insisted on wearing this HOT long sleeved dress today after she came in from a brief attempt to sit outside in the heat advisory type weather. She brought it to Daddy and said she had to have this on. He thinks it is because after she came in from outside she was COLD in the air conditioning and wanted something warm. She has been inside since then, so it hasn't been a terrible choice.

She is still having a very good time with her computer, which has several thinking skill games loaded on it besides her Starfall. We have turned a corner with her in the imagination department, I feel - as I listen to her saying 'What you red one why you kill my bubble?' on one game, and saying 'no no kitty not that way you not supposed to go that way bad kitty ARGRGAH.. here kitty...' on the other. It is quite funny. I also heard her in the bathtub last night saying 'ICE. I got you now. You got ICE, so slippery! You fall down! HAHAHAHAHAAHA I got you in ICE.' She was pointing with her finger then saying 'that is ICE' and rubbing soap down the side of the tub wall and making her toys 'fall' on it. She has been watching The Incredibles and she loves the ice spraying character Frozone - and I could tell by her body language she was pretending she was him! 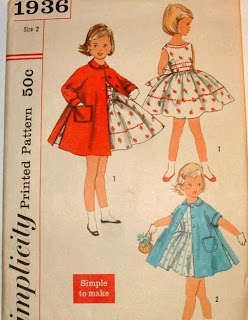 I'm on the lookout for one of this pattern in size 4 or 5, at a not insane price. By the looks of the market at the moment I'll need to look a bit longer! I know the pattern is made up to size 6, and saw a few of both of the other sizes 'out there' but they were either combined with other patterns I don't need or had an insane price/shipping combination.

NOTES: I was down in the valley playing 'Jane of the Jungle' checking on all the seeds that were planted on my birthday and also on Esme's 'experiment' beans. The beans are starting to produce a bit, and it will be nice if they produce some mature seeds to save to plant next year - make Esme and I a 'wild bean' package ;) I also collected some of the marigold and zinnia seeds to save for next year. It felt like I was a kid myself to running around the valley looking at semi-hidden plants and watering them bit by bit.